Sade's not at home, so Rush decides he will have a heart-to-heart talk with his dad about being pulled off as host of the party they have planned for Nicer Scott in the next week or so. 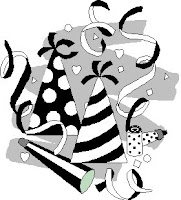 Basing his vision on the "Enthusiasm is contagious" line that basketball cheerleader Nate Crabtree wrote on the school pep rally chalkboard, Rush proceeds to try and encourage his father to persuade Sade to reinstate him as official host of the party.

Rush is full of clever and unique party ideas:

+ Have 2 physicians and 3 nurses dressed in all white in case someone gets sick. (Also, they add class to the party.)

+ Have a policeman in uniform to act as an ornament and to keep order - to see no one makes a disturbance.

+ Provide everyone at the party the chance to get tattooed from the tattoo fellow from 7th Street that Rush will hire.

Vic doesn't seem to think any of these are very effective ideas but promises his son that he will try and to convince Sade to change her mind.


MIS' CROWE SAYS:
Rush confides in Vic about his ideas for an upcoming party, and asks him to try to persuade Sade to put him back in charge of the planning.

This is a classic among Rush’s schemes and a good example of Paul Rhymer’s bizarre sense of humor. What would a 14-year-old boy think would make a party memorable? A band? A chocolate fountain? No, two trained doctors and three trained nurses in attendance, and a tattoo artist to immortalize the party on every guest’s skin, of course.

What makes it even better, and maintains the understated tone that makes Vic & Sade so funny, is Vic’s willingness to humor Rush. If Sade were here, she would likely inform Rush just how crazy and impractical his schemes were. Vic, however, sees that this would be useless, and that the only productive course of action here is to hear Rush out.

One of Paul Rhymer’s favorite (and most frustrating) tactics was to have a character get interrupted halfway through a tantalizing joke:


RUSH: Another idea of mine is to have thirty-five —

VIC: Uh, I believe that’s all I got time for now, Harriet.

What was Rush going to have thirty-five of at the party? We’ll never know...


________________________
This is easily one of the better episodes. Rush's enthusiasm knows no bounds, especially without Sade there to crush his bravado (she is usually the culprit even though Vic has his days too.)

While his ideas are outlandish, they are very clever for a boy of his age and time. While we assume that Rush never got his official host job back, you can be sure he was still a big hit at the party, probably telling anyone who would listen about the ideas he had in store for the lot of them.

+ This is the first surviving episode in which we hear the name Nicer Scott.

+ The new tattoo parlor is on 7th Street.

+ This is the first surviving show to mention Rooster Davis and we find out his telephone number is #4678-J.

NICER SCOTT IS RUSH'S WORST ENEMY
The most ridiculous part (of the episode) is Rush giving a party for that prevaricator Nicer Scott! Maybe the dullness of the resulting party embittered him into reporting on Rush's little knife and fork.
- Sarah Cole

Vic fears Sade. He's non confrontational, and though he can be silly towards Sade and tease her, he knows where the line is drawn.

The elaborate party seems to be a ploy of posturing. Rush trying to out-do a party that anybody else might throw. - Keith @ Retro Radio Podcast