Y.Y. Flirch, a muckity-muck at the Sacred Stars of the Milky Way is in town.  Hank Gutstop, a member of the lodge and Vic's friend, knows Vic would be interested in talking to Flirch and relays the message to a fellow at the Lazy Hours Pool Hall, whose name is either Yoff, Goff or Foff. 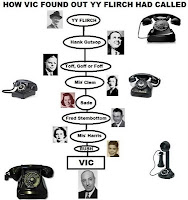 This fellow at the pool hall, calls Consolidated Kitchenware, the place where Vic is employed, but Vic is unavailable at the moment, according to the capable switchboard operator, Mis' Clem.  So she decides to call Sade and leave a message with her.

Well, it seems that Sade was just about to go to Pontiac with Ruthie Stembottom when she got the message, so they decide to call Ruthie's husband, Fred at his job at the foundry, so that he can relay the message to Vic when Vic is available.

Fred Stembottom is apparently pretty busy (he's at work) so he calls the Gook's neighbor, Mis' Harris, who lives across the alley.  Leaving her the message, she decides to call the Gook home and lo and behold, Rush is there and receives the message.

When Vic gets home from work, Rush lets him know that Y.Y. Flirch is in town.  But the message is kind of garbled since it went through so many sources (see graphic.)

Vic decides he will call Mis' Harris but instead of getting her, he must talk to one of her boarders, Mr. Sludge.  Mr. Sludge is more interested in talking baseball, so Vic hangs up on him.

While Vic and Rush try to flesh out where Y.Y. Flirch is and untangle the message, Flirch calls and both Rush and Vic are relieved.

This is one of my favorites! The sheer number of people involved in the relaying of this message, combined with the unreliability of Rush’s memory, make for a perfect storm here. You can tell Rush is concerned at the beginning because he knows Vic is going to be impatient with him about this. But for once, one of Rush’s parents is depending on him to tell a story, and for once, he gets to finish it! Vic isn’t able to get the full story from Rush until he quiets down, stops interrupting, and allows Rush to tell it in the way Rush tells all stories — slowly and carefully and with no detail spared.

This is the first mention of Mr. Sludge in the available recordings. I haven’t made a close enough study of the available scripts to see how much Sludge’s personality was fleshed out at this point. Here he is portrayed as a mildly eccentric, talkative sports fan and perhaps a bit of a bore, but no mention is made yet of what will become Sludge’s key personality trait — his great sensitivity and his propensity for weeping. (I wonder if he went to his room and cried after Vic hung up on him?)

Sometimes an episode is so funny that not even the announcer is able to keep it together at the end. You can hear him struggling to hold in his laughter as he takes the show out!

There are a couple of notable errors in this. In addition to Vic saying he is phoning “Ma Donahue across the alley” instead of Mis’ Harris (the Donahues have moved away by this point), Rush mistakenly says at one point that Sade and Mis’ Stembottom drove “off to Carberry,” when in fact they went to Pontiac. Paul Rhymer was cranking out and recording one of these scripts every day, consistently — you can easily imagine that on some days, time might have been tight and the editing and rehearsal processes had to be neglected. I never noticed these errors until I transcribed the episode, and I bet not many listeners at the time did, either. Poor Paul Rhymer never knew someday there’d be geeks on the internet going over his scripts with a fine-toothed comb!

I find this to be one of the better episodes.  While the episode only has Rush and Vic, they carry on flawlessly without Sade.  (I often think this episode would be even funnier with Sade though as she would have made a mess out of figuring out how the message was relayed.)

As I have written before, anything having to do with Vic's lodge is usually funny stuff.  This won't be the last appearance of Flirch.  He'll be someone you can count on in the future to provide lots of laughs.

+ This is the first mention (via existing audio)of Y.Y. Flirch.

+ The is also first mention (via existing audio) of Mr. Sludge.

+ Vic mentions Mis' Clem.  She is the switchboard operator at Consolidated Kitchenware.

+ The first mention of the Lazy Hours Pool Hall is made.

+ We find out that Fred Stembottom works at the foundry.

+ There's an interesting error in the show as Vic is telephoning Mis' Harris but says he is calling "Ma Donahue" "across the alley"; it seems apparent at the time of this show that the Donahues have moved (although they will move back - I think to the same house in the future.)