After a night of quiet reading (Vic), homework (Rush) and sewing (Sade), the family sit and have a talk about what's going on in their lives.

Sade talks about Mis' Scott, who has been way too chummy lately, Rush talks about Mr. Sludge and Smelly Clark's Uncle Strap and Vic just yawns, jokes and wants a snack.


MIS' CROWE SAYS:
Earlier in the year, Sade did considerable soul-searching about her relationship with Mis’ Scott. Her mixed feelings about Mis’ Scott were plain in this earlier episode, and she returns to similar themes in this one. It seems that her feelings on Mis’ Scott have evolved a little in that she’s made a definite decision not to be friends with her. All her faults aside, Sade knows herself and she is a keen intuitive judge of other people’s character. Putting on my educator hat, I’d say her interpersonal and intrapersonal intelligences are top-notch. It sounds like she has made the right decision in cutting off the friendship (though she might not do it in such a direct way). Again, the parallels between Mis’ Scott/Sade and Nicer Scott/Rush are striking. “Hollering out something cross” is the polite middle-class lady’s version of the 14-year-old boy’s “paste upside the snoot.”

This episode also has one of my favorite endings and favorite Rush lines in it:

RUSH: I expect us three people are what ya call a contented family. Everybody likes everybody.


Being touching without being saccharine or insincere is one of Rhymer’s great strengths as a comedy writer. I can’t help but smile at this line.

________________________
You get the feeling that Sade both likes and dislikes Mis' Scott all at the same time? Mis' Scott is often doing nice things (bringing the Gooks a plate of doughnuts for example) but then turns around and does things that are no-no's to Sade (often comes in the Gook house without knocking, etc.)

One of the more odd stories Sade tells about Mis' Harris: {{{HEAR}}} 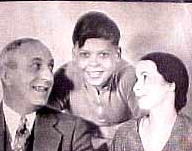 + Mr. Sludge got his feelings hurt at the Five and Ten Cent store (first time that's been mentioned) and was crying, according to Rush. Thinking it was a free sample, Sludge took a cookie and was confronted by one of the workers. He said,"They may as well have called me a thief."

+ Sade says Mr. Sludge is homesick; he misses his mother and sisters in Pontiac (Illinois.) As of this episode, Sludge is 43 years old.