Mr. Sludge needs to make a long distance call to his mother and sisters but since two of roomers at the Harris house are home, Sludge feels quite embarrassed and thinks they might ridicule him. He asks Sade if he can make the call from their home. Sade agrees.

This sets it up for Rush and Vic to mock the man as they stay in the kitchen while he is in the living room.

I probably spend more time than I ought to thinking about the psychology of Mr. Sludge. I think he’s such an intriguing character, not just for the way he acts but for how others respond to him. I think we see Sade at her moral best when she is interacting with childish characters like Mr. Sludge and Ruthie Stembottom. She’s not always terribly kind and forgiving to her own family (who should know better than to act so foolish), but she has a soft spot for lost souls on the outside.


SADE: It’s not your place to make fun! Remember, you’re just a little boy, and Mr. Sludge is a grown man.

SADE: […] All his life he’s been babied and coddled. His mother and sister idolized him. Why, up until he was twenty years old, nobody’d ever said a mean word to him. It was a shock to learn there was meanness in the world. That’s why he cries.  […]

SADE: I don’t think it’s our place to criticize. He can’t help the way he feels. I’m sorry for him and glad to do all the favors I can. It’s cruel to laugh at a poor fella that’s blue and miserable.

I notice that she approaches Mr. Sludge in the same way she approaches Ruthie. She acknowledges that yes, perhaps what they are upset about might seem childish and foolish to us — but people’s feelings are their feelings and they can’t help what they feel and it’s our job to help them without judging them. Sade has no patience with people who are disingenuous and deceptive, like the oily Mr. Erickson, or flaky and manipulative, like Hank Gutstop — but any innocent who gets battered by the meanness of the world has a place under her wing. She’s always had an overwhelming maternal instinct, and it’s not just Rush who falls under her protection.

We find out a little more about Sludge’s background in this episode, like the following:


SADE: He got peachy marks in school, I know. Mis’ Harris’ was tellin’ me he’s got all his report cards stuck in the mirror of his dresser. Wonderful marks. Arithmetic a hundred, geography a hundred, history a hundred…everything a hundred. Shows he’s no ninny.

This is an old trope, the idea that kids who do well in school never make it in the real world. The truth is a lot more complicated than that, and in fact, good marks in school are still a predictor of later success — but Mr. Sludge is a fictional example of a real phenomenon taken to the extreme. Recent research shows that gifted children who are routinely given praise and feedback that focuses on how smart they are (rather than how hard-working they are or how they never give up) often suffer from low self-esteem and low perceptions of self-efficacy. They are more likely to give up when something is difficult — their self-worth is hung up on adults telling them they’re smart, and they don’t want to risk losing that status as a “smart kid.” Sometimes the wake-up call doesn’t come until they take difficult classes in college, or enter the workforce, but a childhood of everything being easy for you in school can lead to a rude awakening later on. This must be at least part of Sludge’s problem, although I’m sure he has social anxiety, too. The guy’s obviously got a lot of issues, and I have to agree with Sade that Vic’s being kind of a jerk about him. But it’s not Vic’s fault, really — he’s probably got some emotional repression himself…

+ No surprise: Mr. Sludge was crying when he asked Sade if he could use the telephone. 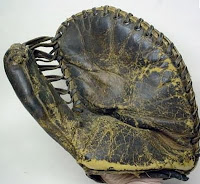 + Just as in a previous episode, Mr. Sludge got his feelings hurt at the Five and Dime. The incident this time was about the very petty difference in price over licorice buttons candy. [Note, in that previous episode the store was called the, "Five and Ten."  We can/will assume they are the same store.]

+ Rush obviously plays first base when he plays baseball because he has a first baseman's glove. It may have looked something like this: