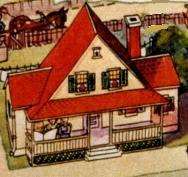 The Gook landlord, Mr. Erickson, drops by and tells Sade that he is giving the home the Gooks rent to his daughter Beulah Feeple as an anniversary present. He envisions wrapping up the house up in red ribbon and Rush being dressed up like Cupid to present the gift.

The bottom line is this: he's actually not giving Beulah the deed - thus, it really won't be her house. Basically, it's just another trick by the sneaky landlord but this time it's a sneaky trick against Beulah and not the Gooks.

________________________
Erickson must really be a crumb. While Vic and Sade show no empathy to Beulah, this episode contains none of the usual derogatory comments leveled her way by Sade. So maybe there is some empathy for her, only hidden.

+ When Vic sees Rush coming up the sidewalk he says, "Here comes Raymond Belcher Beirman, the brainy bum from Buffalo." [Yet another reference to Beirman, who is showing up in many places in this part of the series.]

+ This is Beulah's 7th wedding anniversary.

+ Vic says, "The only advantage Beulah gets from the anniversary present is being able to say she owns property on Virginia Avenue."

+ Rush tells a quick story about Cracky Otto, who broke a violin over a guy's head and still tried to take violin lessons (edited): {{{HEAR}}}

+ Rush tells another quick story, this one about Vernon Peggles and Leland Richards: {{{HEAR}}}

+ Freda was mentioned for the first time in the audio episodes. She is Heinie Call's sister.

Rush tells yet another quick story about Heinie at Freda's wedding: {{{HEAR}}}