Merry Christmas Sade!  The Thimble Club members have bought Sade one of her favorite things: wash rags!  We never find out why or how - but Sade is fully aware of the gift, it's content and it's hiding place.

It's only October and Yamilton's has a better quality wash rag on sale ("a million percent better" - so says Sade.)

Sade uses Ruthie Stembottom as a go-between with Mis' Appelrot, to exchange the current wash rags with better, high-quality wash rags.  And then Sade wants Vic to go downtown to be the other go-between and of course, Vic wants no part of it.

The clincher here is Sade is not supposed to know anything about it - yet, everyone KNOWS she KNOWS about it, yet, they (and Sade) still treat the situation as though the gift will be a big surprise!


MIS' CROWE SAYS:
Sade needs Vic to do her a simple favor. By the end of the explanation of the simple favor, Vic doesn’t feel well.

This episode is a brilliant satire on the complex dance of Midwestern social niceties. Every language has its culture and its pragmatics – the unspoken rules of implication, inferred intent, and interaction, the ones that are most difficult for an outsider to grasp – but the Midwestern American dialect of English is particularly rich in this regard, as we have discussed before. It’s one of the things Paul Rhymer gets so deliciously right over and over again in his depiction of small-town Midwest life in Vic and Sade. Because of the rules of gift-giving, Sade and those in her social circle must perform an intricate series of tactical maneuvers in order to complete what should be a simple transaction. Any directness would be taboo. All of them know that the secrecy is a facade, but they exchange phone calls laden with innuendo in which everything is understood but nothing is stated outright. Vic and Rush are quick to label it as “lady stuff,” but is it, really? Think about Vic being unable to refuse the task of buying a Christmas present for the boss, or the brilliant lies he manufactures in order to get out of helping Fred Stembottom with household repairs instead of having to turn him down directly. Think of Rush and his masterful humblebragging to his friends about his good looks, his scheming to impress his teachers, the simpering politeness with which he greets his pals on the phone – especially when he’s angry with them. Everyone must participate in the dance: when Vic and Rush call it “lady stuff,” they are only deceiving themselves.

This might be the episode that offers the least as far as excitement goes.

+ The Stembottoms are planning to go see Gloria Golden and Four-Fisted Frank Fuddleman at the Bijou: 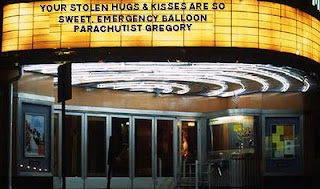 + Rush uses the word, "ladystuff" 11 times in this episode. [Friend to the blog, Bob Stepno, suggests using this episode as a "drinking game."]