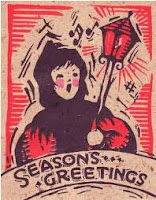 Sade - always on her toes to deflect Christmas card salesmen (especially during the summer months) is tricked into purchasing a set of cards from her niece, Euncie Helfer, who has deviously(?) mailed the package C.O.D.

_________________
Sade doesn't really know if she was intentionally tricked or not. One might say then that if this really was a trick by Euncie, it worked perfectly.

Don't put it past Euncie to be devious. Recall in an earlier episode she put a nix to the letter-writing that Sade and her mother kept backing her into a corner -- by writing letters at an alarming rate.

+ Despite the fact that a set of the Toldeo, Ohio Christmas cards have always been ten dollars, Sade only had to pay $2.46 for her set from Euncie. Is that just the postage? We'll never know.

+ Sade received all the free gifts that come with a purchase of the Christmas card sets: a coupon entitling your initials to be pasted inside one of your hats, a coupon for one hour's worth of free parking in Toledo, Ohio and a coupon for three free handshakes from anyone you choose out of the telephone book of the St. Paul, Minnesota telephone directory.

+ Since the last episode about the selling of Christmas cards, the following people have taken up the job: Euncie, the Brick Mush man and Beulah Feeple.

+ Sade was wanting to put the Christmas cards away in the bottom buffet bureau drawer. Recall that the drawer has been relegated to a lot of items precious to Sade but also a lot of junk in the past.

+ Before she can put the cards up though, Rush wants to purchase them and give them to his friends.

+ Sade and Rush discuss the fact that "Sade is not a comical person."

+ Vic is away on an inspection tour for Consolidated Kitchenware.

+ The show's original ending has the organist playing Christmas music (this is an August episode.)

Before the advent of email and animated websites, people used to celebrate important occasions by using the postal service to send each other decorated pieces of sturdy paper, often featuring some sort of encouraging or celebratory verse. These notes were called "greeting cards." Do you remember them? Electronic communication has made them less prevalent, though they can still be purchased if one knows where to shop. They provided the recipient with a token of good wishes more permanent than a telephone call, or an email. Back when Vic and Sade was being produced, greeting cards were a principal way to commemorate important occasions.

Of course, I'm being facetious. Even today, the greeting card industry is far from dead. At one time, though, greeting cards were such an important part of life that they were available, not only in shops, but from enterprising friends and neighbors. A reader could hardly open a magazine without seeing advertisements for sales kits from greeting card companies. On Virginia Avenue, greeting cards – or more specifically, their sales agents – regularly figured in the adventures at the Gook home. Those magazine ads for greeting card salesmen must have been especially effective in that town. At least five of the neighbors compete for Christmas card sales, and at least five surviving episodes describe their attempts to sell cards to Sade. She is a reluctant customer, partly because she doesn't like to be coerced into a purchase, and partly because of the social politics that would be involved (after all, if she buys from one neighbor, she could offend the other ones.) She also objects to the idea of buying Christmas cards in the summer, which is when the sales pitches begin. But, most of all, Sade has no use for the absurd sentiments the cards express. They range from the insipid ("Give me a kiss and make me feel fine / This is Christmas Nineteen Thirty-Nine") to the offensive (". . .The Christmas season's here again / If I had a club, I'd smash your shin.") Even the premiums are no inducement. No one in the family has any use for an hour's worth of free parking in Toledo, Ohio; or has a desire to shake hands with any three inhabitants of St. Paul, Minnesota, listed in the telephone book. Though it's a great strain on Sade, she is able to resist the sales agents' overtures.

That is, until her young niece Euncie pulls a fast one. Maybe it was youthful naïveté, or a calculated ploy to unload her stock, but her method was to send her unsuspecting aunt a package, cash on delivery. When Sade pays the fee, she finds she has bought a box of Christmas cards. Naturally, this selection of cards has the most awful mottoes of any of them, including such warmhearted expressions as "You're ugly and stupid and mean as a fox / I wonder what old Santy will dump in your socks." Sade would never use greeting cards like these.

Now, I've always enjoyed this episode, for the observation Paul Rhymer makes, through the voice of Rush, about how men communicate. Rush points out that, when men want to show affection for each other, they do it through insults. Even Vic and his close friends frequently refer to each other as "horse thieves." The harsh expressions in these cards are, in fact, masculine endearments. To me, this was a revelation! For years, I had been troubled by the nasty things men say to each other. Even upstanding churchmen will jokingly impugn each other's intellect or character. I won't say I entirely approve of such conduct, but at least the reason for it is now clear. It really is a guy thing!. Rush then proves he is on the right path to manhood: he arranged to buy then from Sade, for use with his own circle of friends.

So, thanks to Rush, we learn that cutting cruelty can sometimes be rough kindness. In that spirit, I extend to you, at Christmas and always, this heartfelt wish:

I wouldn't' trust a rattlesnake like you any further than I can throw a rock.

Still and all, however, I hope you find two dollars, or its equivalent, in the toe of your shabby, worn-out sock!