{{{HEAR}}}
Sade accepts an invitation for the Gooks to spend the evening at Fred and Ruthie Stembottom's house. The men can work on Fred's car - and Vic will enjoy this (she thinks) for he enjoys tinkering with cars.

True. He enjoys tinkering with cars. But Fred has other things in mind and Sade is oblivious to the thinly-veiled plot that changing tires and shoveling coal out of the back seat of the car (among other things) is not 'tinkering' but hard manual labor!

Vic wants no part of it... but to get out of it, he'll have to make the phone call himself.

Vic is incredulous that Sade would accept an invitation of this sort but Sade is so naive that the premise of the situation simply blows right past her.

According to an OTR collecting magazine from the early 1970's, this was the 2,587th episode of the series.

+ This episode was referred to in 41-07-xx Fred's Concrete Partition.

+ In days prior, Fred and Vic had a political discussion that ended in an argument.

+ One of the most memorable lines in the show's history is in this episode. Sade says (an angry) Vic looks like a "thundercloud"... {{{HEAR}}}

+ While we know that Fred has tricked and has tried to trick Vic into various chores around his house (see here and here) we have apparently missed other episodes where Vic was either tricked or tried to be tricked into mowing Fred's lawn, shingling his roof and even washing out his shirts and socks! 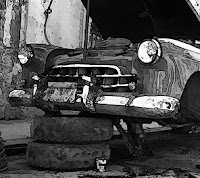 + Charlie Razorscum has "a junk heap of a car" that Vic likes to tinker with.  Recall that once his heap had to be hauled to Chenoa.

One of the things Vic and Charlie do is mix fuels - a dangerous hobby if there ever was one.

+ The jobs that Fred has in mind for his car: cross-switching (rotating) his tires, scraping the spark plugs, straightening the fenders and get coal and coal dust out of the back seat.

Russell says - and sounds like he knows - that cross-switching comes from Indian (folklore) about a princess...

Removing the coal from the back seat insinuates that Fred steals coal from somewhere in town and puts it in the back seat... Recall, there is a coal mine in town.

+ So that Vic can truly enjoy himself as he slaves over Fred's car, Ruthie has thoughtfully bought a sack of peanuts.

+ Neither Sade not Vic want to call the Stembottoms and back out but Russell readily volunteers to do the dirty deed. Recall that he also volunteered to do another dirty deed, when Mis' Harris' roomer, Mr.Overholt, was needing to be evicted.