Then, Uncle Fletcher really pulls the rabbit out of the hat when he suggests that Mr. Feedburn - who is arriving two weeks prior to the wedding - stay at the Gook house in the interim.

Sade, while not refusing, questions his request in such a way that we know she will eventually refuse. 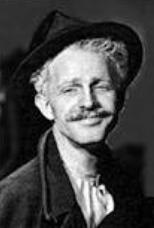 Vic and Sade, while trying not to be negative to Uncle Fletcher during his busy time of helping prepare for the wedding, have to be on their guard; for Uncle Fletcher is full of surprises and is trying to brush off some of the responsibilities off on the couple.

Has he bitten off more than he can chew? Why does he care if his land lady gets married? Why did he take oceans of responsibility if he wasn't able to tackle it? Questions better left until another episode because the answers aren't in this one.

+ Russell asks permission to go to the YMCA to watch the fat men play handball; this is the first time I recall either he or Rush asking permission to do that. As a matter of fact, the only things I ever recall the boys needing permission to do anything was for sleeping over at a friend's house and going to the Bijou on a school night (many times.)

+ When Russell arrives at the house, Uncle Fletcher wants Vic, Sade and himself to go to Vic's office at the Consolidated Kitchenware plant so they can be alone. When Vic questions Uncle Fletcher about this asinine suggestion, Sade tells Russell to "Go down cellar." It may not seem that funny to the casual Vic and Sade fan but it struck me as being one of the top 50 or so moments in the show's history; this is because of the way Bernadine Flynn delivers the line (almost a whisper to Russell) and the fact that in a previous episode, Uncle Fletcher tried to shoo Sade and Russell into the cellar to talk business with Vic.

I'm guessing that writer Paul Rhymer was shooed into the cellar in his youth or just has a warped sense of humor. Cellars are no place to congregate and spend time. Imagine the spiders and whatnot down there... Either way, the notion (to me anyway) is hilarious.

Russell, understanding he's "not wanted" during the "big news" suggests, "Why don't I go to the Miller Park lake and jump in? I'd be just about as welcome there..."

+ There are a number of lines in this episode that are funny but only if you have been following the whole "Mis' Keller is getting married" thing. Uncle Fletcher deems it necessary to talk superfluously while speaking about his responsibilities and has been repeating the phrase, "the unbearable alternative" throughout the weeks of this particular storyline. When he says it in this episode, Vic suggests he gets the meme "tattooed to his chest."

+ When talking about the two hotels in town - the Butler House and the Bright Kentucky - Uncle Fletcher says, "One is expensive and one is shabby." While this is true and it's well-known to even the casual Vic and Sade fan that reads Vic and Sade material strewn over the internet (Wikipedia for example.) This is the first time the two hotels have been compared in this exact stereotyping.