Everyone wants to hang their picture on the wall - at the same time.  And there's too little wall space.

NOTE: The previous 'Friends of Vic and Sade' notes provided to me in 2012 give additional information for this episode that is not provided in the included synopsis.

First of all, it's hard to believe that all of the sudden, all three Gooks have something to put on the wall at the same time.  I know it's radio, and we are prodded to 'play along' but come on...

However, what is strange about this episode is how Consolidated Kitchenware is so much like the mysterious goings-on of Vic's lodge!  You may have noticed how closely both entities are to Vic's heart.  Perhaps to writer Paul Rhymer they were quite similar - as evidenced by the fancy speech used in this episode and skull and crossbones on Vic's 'Golden' certificate: 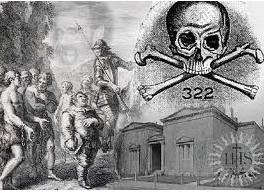 You could change out all of the "Consolidated Kitchenware" references in this episode and replace them with the "Sacred Stars of the Milky Way" and we probably wouldn't recognize much of a difference.  The Kitchenware Company even uses real Latin on their certificates.

Later, Consolidated Kitchenware wouldn't be as important to Vic as it was in the early years of the show.  While Vic is no doubt dedicated to his job and is a faithful employee, he's not quite as fanatical about work as he is the lodge.  It's close, though.

This episode represents one of the first mentions we have of Uncle Fletcher.  While he plans on stopping by the Gook house, we know he won't show up in person on the show until 1940 (six years later).  Also, we have the mystery as to why Fletcher was headed to Washington D.C. --  Fletcher's family and cronies all live in the Midwest.