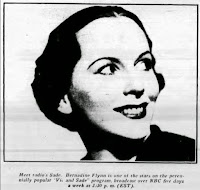 Sade is busy and she's determined that the boys (Vic and Russell) must run some errands.  Though not against her, the men seem bewildered and are at a loss against Sade's no-nonsense approach to the chores.

___________________
Sade often forces the men to help with chores.  Despite what excuses they may have (remember: "Handmen play fatball"?) they always comply.  The men of the family fear Sade.  Well, everyone but Uncle Fletcher, but he's nowhere to be found in this episode.

* The oddest part of this episode seems to be the picnic at the foundry where Fred works.  When I try to come up with a reason why I deem it odd, I really can't.  So maybe it's not so weird.  :o

* Not that uncommon in 1944: Sade refers to Ted Stembottom as "Fred", (thanks to Uncle Fletcher just a day prior to this episode).  The entire family practically stops calling Fred by his real name as the days continue.

* I never kept track of how often Russell and Rush were excused from class because of "special teacher's meetings".  This happened quite a bit beginning in 1942 and much more frequently in 1944 - increasing as time went on.