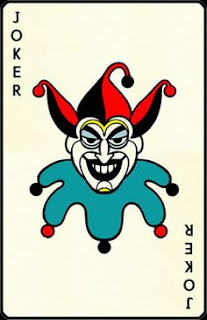 Vic, Russ and Uncle Fletcher come home and decide to play cards.  However, they get wind that Sade is home and has a letter from Bess. They quickly hatch a plan so that they won't hurt Sade's feelings and can still get in a few hands of cards.

When the plan begins to go into action, Sade smells a rat and begins looking at the men for signs of guilt. Surely, you know who wins.

This is yet another episode that talks about Euncie practicing the "The Great Colorado Train Robbery Scottish", which would eventually put her in bandages.  Just another of the long-running Paul Rhymer gags that he turned into a ridiculous situation.  I'm almost certain that somewhere in 1944, either Walter's kneecap completely healed up or it exploded.  I assume we will never know.

* Uncle Fletcher seems completely out of touch here.  Sometimes, he appears socially aloof, but in this episode, it really seems as though there is a bit of an unknown problem with his brain.

* It would be very interesting to know how many episodes we know of where cards were mentioned.  Also, letters/cards from Bess: this is about the 25th letter/postal card or so that we know that Sade has gotten from Bess.  My crazy math tells me that Sade got a letter from Bess about every two weeks.  That could mean that during the run of the first Series, she may have received/talked about 300 letters or so.  Is that possible?

* Uncle Fletcher tells of Quentin L. Spondle, who changed his wife's name from Leota to Dorothy, against her objections.