Sade arrives home bearing bad news: her niece Euncie has badly injured herself while practicing the piano! Russell seems interested in this news but Uncle Fletcher may or may not understand the importance of the situation. 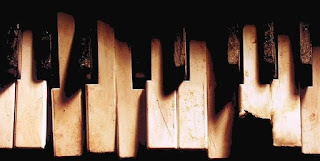 _______________
Uncle Fletcher has something on his shoe and between his teeth - and feels that Sade needs to chill out!  At least, that's probably the way he feels.  It's hard to pinpoint Fletcher's motives and fragile emotions in 1944, as he's been known to use them against Sade in order to get attention.  Who knows?

It's funny to see Russell taking on the role of Vic here in 1944. By the time 1944 came around, Vic would playfully 'mess' with Fletcher as you could tell that both were getting under each other's collar. And note here that Russell (at age 14, I believe) acts totally different than Rush would have. Rush would never really have been irritated by Sade's uncle, but it's obvious that Russell feels he's being put 'down cellar' - something Fletcher never hesitated to say to and about him many times in these later episodes. There's no real animosity; both seem to go their merry way after the slight battles.

* The piano piece Euncie hurt herself playing ("The Great Colorado Train Robbery Scottish") was also mentioned in March and June of '44 (in other words, a letter from Bess mentioned the piano piece at least 3 of 4 months. It's likely we are missing other episodes that talk about this complicated piano piece). This accident broke a bone, caused a bruise and initiated shock... (shock - aka acute stress disorder, may include these symptoms, according to Wikipedia:  numbing; emotional detachment; muteness; derealization; depersonalization; psychogenic amnesia; continued re-experiencing of the event via thoughts, dreams, and flashbacks; and avoidance of any stimulation that reminds them of the event. During this time, they must have symptoms of anxiety, and significant impairment in at least one essential area of functioning. Symptoms last for a minimum of 2 days, and a maximum of 4 weeks, and occur within 4 weeks of the event.)

The incidents involving Euncie and the piano are really worth taking a look at, because like all Paul Rhymer plot pieces, they seem to get more bizarre as time goes by.  Euncie is roughly 15-16 years of age and Rhymer is literally crushing her bones!

* Fletcher mentions Oscar McSpilcher's son Harry fell off of a piano and all he broke was his shoestring.


Some of the notes here came directly from Barbara Schwartz