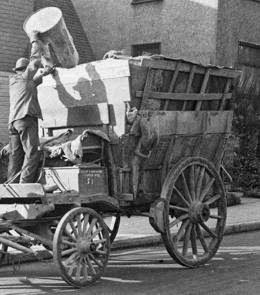 Mr. Gumpox will be away: he'll be taking a walking trip to the Northwest Central part of Illinois.  In his stead will be S. Quentin B. H. LaBelle Jr., ''A man who has the lightest and most-skillful touch with garbage'' and, ''A true artist-a master-in every sense of the word, who can give cards and spades to any garbage practitioner in the United States.  He's got garbage in his blood and his passion for garbage burns with a clear, blue flame.''

''S. Quentin has all-gold teeth and won't wear sox.  He was born and raised in Apple Gully, Michigan, where he learned the rudiments of garbage.  Later, he traveled extensively through Arkansas, Missouri, and Texas. making a life study of garbage.  His place of residence was the Bright Kentucky Hotel where he has the best room in the house, a north exposure cooled by the constant rush of freight trains.''

___________
It is made clear (in what are, essentially, notes from Paul Rhymer) that Mr. LaBelle was a non-speaking character.

Though he seems important, his name never pops up in the audio we have, nor is he mentioned in anything I have run across so far.

The date is unknown and the title was provided by me, purely for identification purposes.  (I believe that) the information for this episode was found in a box in the Wisconsin Historical Society's Paul Rhymer collection.