IMAGINED: A PICTORAL LOOK AROUND TOWN

THE GREEK - This combination soda fountain/ice cream shop also gives away free water (which Rush and and his friends take advantage of often.)

MILLER PARK - A large park somewhere west of where the Gooks live.  There's a zoo, lake and picnic area there.

LITTLE TINY PETITE PHEASANT FEATHER TEA SHOPPY - Very small restaurant (only 3 tables) that was run by Mrs. Idler Grice but was later taken over by Thimble Club ladies (and Pom Pom Cordova!)  Vic ate there once on a business lunch and had to sit outside on a ladder. 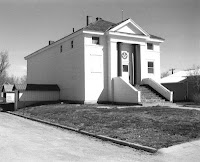 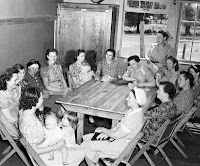 THIMBLE CLUB - Sade heads a local sewing club which is often more about gossiping than it is sewing. Members Mis' Appelrot and Mis' Brighton tend to add negativity to the lot, with each having a dislike for Sade and Ruthie Stembottom and are particularly wound up over the petite size of Ruthie's feet. 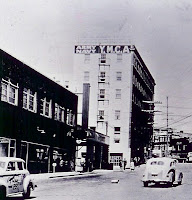 Y.M.C.A. - One of the few legitimate places named in the series.  Rush and Russell often go there -  not to participate in physical activity, mind you - but to waste away hours watching the fat men play handball.

THE AREA NEAR THE BRIGHT KENTUCKY HOTEL - A dangerous area, especially for Uncle Fletcher, who frequents the hotel with gusto and also the Interurban station, which is not too far away.

THE COURTHOUSE - The Gooks live just down the street from it and they can hear it's bells ring when it's the top (or bottom) of the hour.  The courthouse lawn is often used by the seedier men for goofing off or discussion purposes. 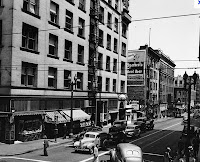 SHOPPING DOWNTOWN - Sade enjoys going downtown and buying small items such as pins and candy and she and friend Ruthie Stembottom will always weigh themselves at the Dime Store.  How much does she spend?  We'll never know.

TATMAN'S VACANT LOT - Rush and Russell both use the vacant lot to play baseball.  Each can and do play various positions around the diamond.  Here's a picture of Heinie Call and Arnold Shipley, two of Rush's friends, hamming it up for the camera. 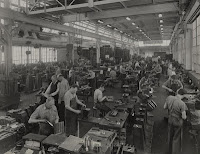 CONSOLIDATED KITCHENWARE - This is the place where Vic works as an accountant.  Unlike these fellows, he never has to get his hands dirty.  He wears a nice clean white shirt to work everyday and has his own secretary, Mis' Hammersweet.

HIGH SCHOOL - Here's the high school that both Rush and Russell attend.  There are some crazy things that go on there, so it's best not to hide any butter patties in your mashed potatoes for fear of getting caught.

CROUCHER'S GROCERY - Both Rush and Russell are always having to make a trip here to buy items like salt, eggs and matches.

BRIGHT KENTUCKY HOTEL - One of the seedier places in town, it's loaded with friends of Uncle Fletcher and Vic.  Almost every barber in town lives there yet they all work at the Butler House Hotel barbershop.  Smelly Clark's Uncle Strap works there as a night clerk.  The Chicago-Alton railroad runs very close to the hotel; so close in fact that it's known to jar beds down the hall.

BUTLER HOUSE HOTEL - The nicer of the town's two hotels; this one has a barbershop and the fashionable Purple Room restaurant, where Vic often entertains Consolidated Kitchenware personnel visitors.  "It's one of the finest hotels in Central Illinois" - according to Vic.

THE GOOK HOUSE - It's a small house halfway up the next block.  It's not a monster house by any means but the bedrooms are upstairs making for a spacious living room. You can see part of the Donahue's house next door. 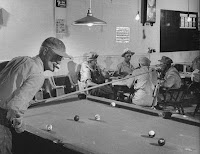 LAZY HOURS POOL HALL - Located in the seedy part of town near the train station and the Bright Kentucky Hotel.  It's been known to be frequented often by Hank Gutstop and as you can see, visiting engineers from the freight runs. The pool hall is apt to give away cole slaw because of the advertising coupons they send in the mail.

INTERURBAN STATION - Here's where the streetcars reside.  Uncle Fletcher likes to hang out and even work there as a fill-in.  He also co-owns a peanut vending machine inside with B.B. Baugh. 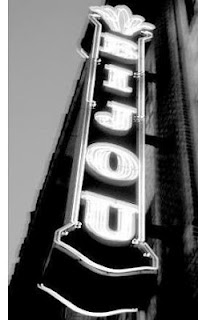 BIJOU THEATER - (((HEAR))) The local theater is the Bijou (pronounced, "by-Joe") and plays almost exclusively the films of the glamorous Gloria Golden.  Four-Fisted Frank Fuddleman will often co-star with her. Vic hates her films - but Rush, Russell and Sade all seem to enjoy her - at least somewhat.

Mr. Gumpox, on the other hand, never misses a new film at the Bijou and is always there on Opening Night.