Victor Gook finds himself rushed as he's just found out that a dignitary from the Chicago branch of the Sacred Stars of the Milky Way is in town and the lodge will be holding a special meeting. 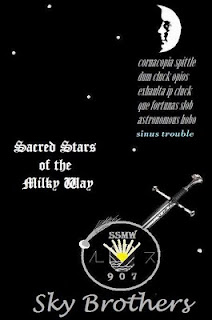 He enlists the help of Rush and Sade.  He asks Rush to get him Volume 7 from his lodge library and to also get his lodge regalia.  He wants Sade to call Hank Gutstop and read him an official greeting from Volume 7 so that he can memorize it.

As with almost all Vic and Sade stories, there's a hitch.  Vic comes to find out his pants were loaned out to Tom Packett who recently played the part of Santa Claus.

It seems one of Vic's boots was loaned out to Mis' Husher who hung it over her fireplace for Christmas.

It gets worse, as we find his plumme hat was loaned out to Smelly Clark as a Christmas tree ornament and his robe (Charlie Razorscum) and tunic (Mis' Brighton) were lent (no reasons given) out as well.

The only piece of regalia of Vic's left untouched is his sword.


MIS' CROWE SAYS:
This is a classic for sure. Sade, of course, is able to perceive her husband’s outrage at all of the indignities she has subjected his lodge regalia to, and the inconvenience she has caused him, but still seems oblivious as to what, exactly, she has done wrong. (After all, who wouldn’t do the neighborly thing and loan out such fabulous articles to people in need?)

SADE: Well, goodness, you didn’t give a person warning you wanted everything all at once. If I’d had the slightest inkling —

(Leaves me wondering: when has Vic ever not needed his entire lodge uniform all at once?)
I do feel a little sorry for Sade when she is forced into a task she finds completely odious — reading Latin over the phone to a man she despises — but you can’t deny that she kinda brought it on herself.
This episode contributes a lot towards my mental image of Victor’s lodge regalia, since we find out that the pants are appropriate for someone to play Santa Claus in. I picture the whole uniform in scarlet, maybe with gold trim, with a white ostrich plume in the hat — kind of a broad-brimmed, Three Musketeers affair (and we know how much Vic loves a broad brim).

For your curiosity, here’s a picture of a Knights Templar member, circa 1893.

Change the blue to red and it comes pretty close to the picture in my imagination. (At least Vic doesn’t have those fancy gauntlets for Sade to lose track of.)

Why would Sade and Rush lend out all of Vic's regalia without asking? Since Vic holds the lodge in the highest esteem, we might say that they did it subconsciously to get back at Vic.

The really funny part of this story is that Sade is finally persuaded to call Hank Gutstop (a man she does not like) and recite over the phone her choice of "Greek" or "American" (Latin or English) versions of the official lodge greeting for a dignitary.

+ Tom Packett, who works as a butcher at Middleton's, lives on N. Center Street.

+ Vic and Sade were supposed to play "500" with Fred and Ruthie Stembottom but had to cancel it due to the lodge meeting.

+ L.W. Eakins is the visiting lodge dignitary. He is from Chicago.

+ The English version of the official lodge greeting for a dignitary:


Oh little frenzied brother of mine, bring your clutching hand and listen for the call of the golden oriole as the maiden stands by the splashing pool as the mischevious tarantella...

+ The "Latin" version of the official lodge greeting for a dignitary:

SADE'S LOW REGARD FOR THE LODGE

I think Sade would show such low regard for Vic's regalia for two reasons. First, she is an essentially an obliging person, who likes to be on good terms with her neighbors. If she can accommodate them in some way or another, she will if she can. Second, she shows low regard for the regalia ... because she has a low regard for the regalia! She's glad to humor Vic's whims tp a point, but, in other episodes, she complains about how much all the "lodge junk" is costing the household budget. By loaning out the regalia, she is showing her contempt for that foolishness, and getting a social return on the monetary investment. Somebody is actually using the stuff in a way she understands, and she's gaining social prestige in the process. However, she does have respect for Vic himself, and for the justice of property rights, thus her compliance with his order to read the ritual greeting to Hank Gutstop. - Sarah Cole

{{{HEAR}}} Sade must read lodge Latin over the telephone to Hank Gutstop.