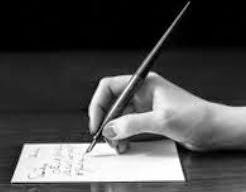 Sade thinks it would be nice for Vic (and Rush) to write a letter to her brother-in-law Walter Helfer.

What Sade doesn't seem to realize is that Vic and Rush don't think very highly of Walter. As a matter of fact, they seem to enjoy making fun of him. (Listen to Rush read Vic's first letter to Walter...): {{{HEAR}}}

Sade is offended by the output by the boys and punishes Vic by going to bed early.


MIS' CROWE SAYS:
Sade wants Vic to write a letter to his brother-in-law Walter. Vic really, really does not want to do this.

Oh, Vic, Vic, Vic. He reminds me here of a student who is putting forth extraordinary effort to avoid doing a repellent classroom task. (It always amazes me how much work people will put into avoiding something they don’t want to do, even when the task they’re avoiding involves much less work than the avoidance strategy.) He’s also similar to some students in that he greatly underestimates the intelligence of his taskmaster. (Vic, did you REALLY think Sade wasn’t going to notice that you’d just copied an article from the newspaper into your letter?)
Sometimes Vic can be terribly childish, and he’s quite adept at getting Rush onto his team when he goes into “impish boy” mode. (Stay tuned for one of my favorite episodes, “Mr. Sludge Grows a Mustache”…) But today, Rush is much better at gauging the emotional temperature of the room than Vic. He allows himself a giggle at Vic’s first, completely unserious attempt at a letter to Walter, but when he sees how mad that makes Sade, he jumps into the role of the good son, proudly penning a borderline-smarmy letter to his uncle. Then he calmly watches Vic push himself into the abyss, his mind easy in the knowledge that he has saved himself from her ire.

Vic rarely pushes Sade’s buttons enough that she loses her temper, but this time, she storms off to the bedroom, leaving him to stew in his own guilt. It’s a drastic measure, but it’s the only thing that will make him produce the letter. Boy, I’d hate to be Vic having to creep to the bedroom with his tail between his legs after this!

I sympathize with Vic, as I think we all can. It is so awkward to fabricate a relationship with someone whom you have nothing in common with, purely on the basis of family membership. It’s hard to imagine Vic getting chummy with a man who is so insecure that familiarities like “you old horse-thief” and even “old top” might offend him. But family means the world to Sade, so fabricate he must.
One important discovery that Paul Rhymer made was the comedic value of the horse (well, perhaps he wasn’t the first to discover this, but he certainly made good and consistent use of it). I can never keep from laughing out loud whenever I hear Rush say:
RUSH: I’d just as soon drop ‘im a line. I’ll say: “Dear Uncle Walter: How’s your kneecap? Day before yesterday I saw a horse fall down. He got up almost immediately feeling none the wiser.”
Why is this so funny? Is it because “horse” is a funny word? Is it because a horse is a funny animal? Most people would say they were majestic. I’m going with “funny word.”

SEE THE SCRIPT  (This script differs from the "official" script as it is transcribed directly from audio and has many differences.  It was transcribed by Lydia Crowe.)

If you've ever had a brother-in-law, you know that they are someone you are kind of forced to get along with, whether you want to or not. In most cases, when you force someone to do something, it's not going to work out well.

Walter seems to be less than greatest guy in the world, at least to Vic and Rush. Sade seems to be crazy about him but Sade is nuts about all sorts of things.

The kicker is the ending, when Sade walks out on Vic. It's totally uncalled for but perfect in that it makes Vic feel guilty.

+ Dr. Lostmorris Creek is mentioned. He gave a speech to the Alumni of the University of Chritton at the Butler House Hotel.

+ Edith Clem was mentioned as giving a trombone solo at the hotel as well. She played the song, All My Hugs and Kisses, Alma-Mater, Belong to Thee.

Sade asks Vic what he writes in his letters to Y.Y. Flirch: {{{HEAR}}}

The date on this episode has been pinpointed more exact than it was (it was dated 39-xx-xx).  See this for reasons.