Vic and Sade are always frustrated at their landlord, Mr. Erickson. He's cheap and wants to take a shortcut or the least-expensive route to every house problem the Gooks have. Sade particularly has trouble with Mr. Erickson and in this episode, he avoids both her and Vic by dropping off samples of some new wallpaper at the Gook house with only Rush there to accept them. 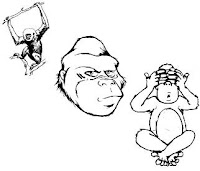 The problem is, the wallpaper is not only cheap but ugly.  Many of the samples display pseudo-psychedlic, headache-inducing graphics or just plain ugly items, like the 2 or 3 mentioned during the show that have some sort of animated primate life colorfully displayed.

To top it off, Mr. Erickson's daughter has picked out "the best ones" and has given her fashion critique to several of the wallpaper samples. Of course, her ideas are a little off-the wall (pardon the pun!)


MIS' CROWE SAYS:
Vic and Sade are struggling with their sleazy landlord Mr. Erickson again — this time on the matter of wallpaper. He’s brought them some options for their upstairs wallpaper, and none of them are good.

A prime example of Paul Rhymer’s ability to paint hilarious word pictures. The humor in the episode is all visual — it’s about ugly wallpaper. But, much as we don’t need to hear the voices of the show’s secondary characters to appreciate them, we don’t need to see the wallpaper to laugh at it because the images Rhymer creates in our heads through the family’s descriptions and reactions to the wallpaper are funnier than any picture would be. I wonder if he saw any real-life wallpaper that inspired these ideas, or if it’s just a brief journey into madness.

It’s great to listen to the whole family united in making merciless fun of something. Rush, as the holder of the patterns and the reader of Beulah’s notes, gets to hold court here and employs comic timing and deadpan delivery to entertain his parents (and us listeners). I think this is an especially entertaining episode, and the announcer, who is barely holding it together by the end of the episode, seems to agree with me.

+ For the first time in a long while (in the surviving audio episodes), Ruthie calls about playing "500."

HOW DO YOU PICTURE BEULAH?

I picture her as taking after her father in appearance and volume -- she is a stout woman with an unnecessarily loud laugh -- but not in character.  Her manners are a result of insecurity, rather than domination, and of familiarity rather than choice.  She is not a clever woman, and mimics her father because she knows one other model.  In fact, she most likely has never given her behavior any thought at all. - Sarah Cole