The Gooks are "entertained" by Sade's eccentric Uncle Fletcher, who
proceeds to inundate them with his ladylady's scrapbook and his terrible memory.

Uncomfortable and eventually becoming bored with photos and stories they've obviously seen and heard before, Vic, Sade and Rush try to remain pleasant and polite to Sade's dear Uncle.

Vic’s, Sade’s, and Rush’s characters all evolved in subtle ways over the first few years of the series, but Uncle Fletcher seems to have entered the show fully-formed as a character. In this, his audio debut, we get most of his beloved catchphrases (“he’s a good boy,” “fine,” “delicious supper”), two protesting-too-much speeches about never having visited Boone, Iowa, and some stories that never get finished. I always enjoy hearing how the other characters interact with Fletcher and with each other when he’s around. For one thing, they’re a lot more polite and respectful when Uncle Fletcher’s around. It is established that Vic hates looking at photograph albums, and he’s already seen this one before, but he hardly makes a peep about it, and he never sounds cross. Rush doesn’t interrupt anybody and is perfectly content when Fletcher interrupts him. Sade is as patient as a saint with him (although we do know from later episodes that this patience has its limits).  They also do something that I’m sure anyone with an older, hard-of-hearing, slightly dotty relative in their family recognizes, which is to talk about him really, really quietly while he’s right there — never in a disrespectful way, of course; only to avoid hurting his feelings:


One little thing that gives me endless delight every time it happens is Fletcher’s mispronunciation of “Ottumwa" as "Ottumna." I imagine this as something like the later "Fred/Ted" thing that people have tried to correct Fletcher on many times but eventually given up. Ottumwa is close to my hometown and I now find it difficult not to refer to it as "Ottumna" every time it comes up in conversation. 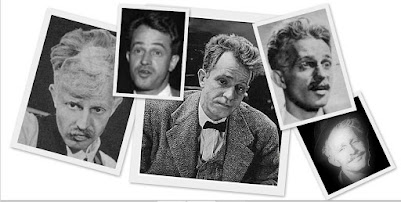 We've been hearing about Fletcher a lot in the past 20 or so audio episodes and while previously we have only heard the 3 voices on the show, the new 4th voice is quite a jolt.

Before I heard Uncle Fletcher, I was quite apprehensive about how he would affect the show and whether or not I would like this "intruder." Upon hearing this show the first time, I could not believe my ears for this character actually makes the show better. As a matter of fact, the next 100 (or so) shows are the series finest moments, many of them propelled by Uncle Fletcher (played perfectly by Clarence Hartzell.)

You will find that Fletcher is old, wise, loving, caring, kind and funny. He's 35% senile/15% goofy/50% eccentric - and a ball of energy.  Things go virtually non-stop when he's on the show.  Everything seems to focus on him. He is the life of the party - literally.  Yet somehow, even when he is the focus, the other characters seem to shine too.  [Perhaps not in this episode as we are given an overdose of Uncle Fletcher.  While the show will focus on Fletcher again in the future, when he is on, Vic, Sade and Rush will continue to shine in episodes about their own trials and excitements, just as before.]

Have a listen to Clarence Hartzell talk about his introduction to the Uncle Fletcher character  (1970's): {{{HEAR}}}

After a couple of episodes of Uncle Fletcher, you will wonder why he wasn't there to begin with and you will also accept him as part of the family, for he fits right in most perfectly. He is a round peg in a round hole and as you will soon discover - if you haven't already - that the four actors will team up to become what I feel without a doubt is the funniest show in radio history.

+ This is the first time another character has actually talked on the show (at least, in the surviving episodes.)  There was at least one other time when another character was "in the same room" but he (Blue Tooth Johnson) didn't say anything.

+ Before this show, Uncle Fletcher had been mentioned on 7 previous,  surviving Vic and Sade programs.

+ This episode title has the words, "Again" in it, so we can assume there was another episode similar to this that did not survive. There are a few more surviving episodes where Uncle Fletcher does vitually nothing but show objects/photographs as well.

+ Uncle Fletcher (or perhaps his landlady) keeps the photos in a brick mush box.