Sade is proud of herself. She went shopping with Ruthie Stembottom and kept track of all the transactions on paper. There was no way the money could get fouled up. Yet, it did.

________________________
Not surprising at all. Sade is wise as a horse when it comes to reading people but on the other hand, she has a tremendous weakness for anything having to do with math. Every trip shopping with Ruthie winds up in muddled money, which is a running joke on Vic and Sade. 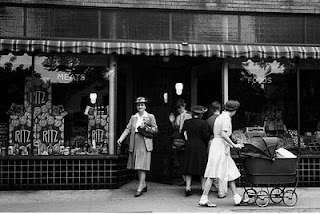 + Sade seems to think since she cannot do math correctly, Rush can't either. She makes him subtract a nickel from a dime on paper. Also other simple math problems...

+ In this episode, Sade refers to Ruthie as a "featherhead" and "scatterbrained." Those two words could easily describe Sade's poor ability to properly calculate.

+ Items Ruthie bought while shopping: hooks and eyes, candy, use of weighing machine and safety pins.

+ The "Ten Cent Store" (assuming Sade was referring to the "Five and Ten") has a weighing machine.

+ Vic and Rush notice and point out the flaws in Sade's financial frailties: {{{HEAR}}}