Nicer Scott has been over at the Gook house and notices that Rush uses a small set of eating utensils; something like a small child would use.   The utensils even have an angel on them.

Nicer takes this information, spreads it across the neighborhood and hopes to smear and humiliate Rush.

Meanwhile, Rush is infuriated with Nicer and plans to go over and "wang him one upside the bean." Instead, he has to answer degrading phone calls that inquire if he does other baby activities.

Nicer Scott is at it again. He has discovered a dirty secret about Rush and is spreading it all over town.

I love what this episode says about families, and the way that each family has its own unique quirks that no one ever mentions because they’ve always done something a certain way. It can be either eye-opening or embarrassing to have the outside world come into your private family sphere and look with fresh eyes at the way you do things. It never even occurred to Rush that his little knife and fork were unusual, until someone else called attention to it.

What did you find out was weird about your family later in life? I learned that most families don’t put weird-tasting dead bacteria on their popcorn, that animal skulls are not as widely-used in home decor as I thought, and that cars that don’t work anymore usually go to the junkyard, not just the backyard.


[Rush] is in a rage at the neighbor boy, who has passed the word among his friends that Rush eats with a baby knife and fork. As it turns out, Rush DOES eat with baby silverware, because that's what Sade has always put by his plate, and he didn't want to make a fuss about it. His struggle is the struggle we all face, or that remind us of what our children are confronting.

+ It's worth pointing out that this was the very first Thanksgiving since Franklin Roosevelt's famous Four Freedoms speech (January 1941.) The Four Freedoms would be masterfully depicted by Norman Rockwell in 4 paintings two years later, including the famous, "Freedom From Want" Thanksgiving scene.  This was also the last Thanksgiving before rationing and World War II, so this Thanksgiving embodied a freedom from want.
You could imagine families talking about this Thanksgiving during the war as the Thanksgiving where various foods were in abundant supply.  In the war years, there would be little butter, sugar, meat etc.

The Japanese would attack Pearl Harbor 17 days from the day this episode aired, forever changing the world and certainly changing Thanksgiving dinners for the next four years.

+ It's well known that Rush dislikes Nicer Scott a lot. So, one wonders why was Nicer over at the Gook house to begin with?  The answer might simply be: Thanksgiving.  Perhaps the Scott family was invited over.

I can imagine a missing episode where Rush protests inviting them over, much like he whined about Nicer having to sleep over when the Scott's had company. 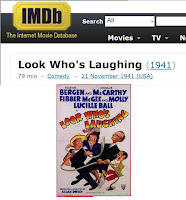 + Sade is preoccupied reading the paper and about a local wedding.  Mentioned in the list of wedding guests Sade reads is "J. Cadwalader Urquart" - reminding one of "Otis J. Cadwalader" who was Molly's old boyfriend on Fibber McGee and Molly (and played by Gale Gordon both on radio and in the motion picture, "Here We Go Again." )

Oddly, the first Fibber McGee and Molly motion picture was Look Who's Laughing that came out the day after this episode aired.  (November 21, 1941.)

Isn't it likely that Paul Rhymer saw a pre-screening of the film (in Chicago, the home of both Vic and Sade and Fibber McGee and Molly at the time) and was influenced to use the name, which he had heard many times on the radio?  Perhaps the name was used in "Look Who's Laughing?"

+ Sade reads that the bride and groom rode away from the wedding on a motorcycle.  That was probably a very funny idea in 1941 but really doesn't seem that odd today...

+ The back of the fork has "Darling Baby" inscribed on it. Why would the fork say this if Rush was adopted at 7 years old? And if the utensils are for a baby, why are they 2/3rds the size of regular forks and not 1/3rd or smaller?

+ Dismal Seepage, Ohio is mentioned for the first time in the surviving audio. It will later go down in Vic and Sade lore more than places like Grovelman, South Carolina and East Brain, Oregon.

+ It's mentioned that Mr. and Mrs. John M. Weeper lives on South Center Street.  They held the wedding party that Sade read about in the paper.

+ This episode didn't just occur on Thanksgiving, but on the very first Thansgiving that those in the United States observe.