Fred and Ruthie Stembottom have invited the Gooks to take a car trip up Route 66 to Chenoa. 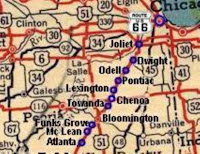 Sade can't stand Hank and Razorscum wants his car towed so he can find parts.  It's going to be embarrassing for the Gooks to have explain these situations to Fred and Ruthie.

Meanwhile, Rush is the object of his parents irritation as he spends the whole episode upstairs yelling downstairs inquiring about his lost pants.

Vic and Sade have both stuck their neck out so far, they can’t even get mad at each other.

The car situation in this episode is funny, but for me the clear star of the episode is Rush, who spends the entire time upstairs, searching for his missing pants. Not only is “I can’t find my pants!” inherently funny (the word “pants” is funny and the thought of someone wandering around without pants is funny), but Rush performs wonderfully as a drama-ridden teenager, wringing increasing amounts of rage, frustration, and despair out of the line each time he delivers it. He also has a knack for interrupting at just the right time and just the right intervals for maximum annoyance. And few things are funnier to me than Rush interrupting with a loud “WHAT?” while Vic or Sade is in the middle of trying to explain something to him. Vic and Sade may have their own drama going on as they work out how to break the news to Fred that they’ve imposed terribly on him (and we all know how easygoing Fred is about his car), but the real show is upstairs.

+ Hank was invited along to talk over an important lodge ritual.  (Sade, of course, doesn't like Gutstop.)  (((HEAR)))