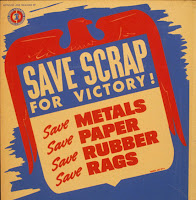 After being inspired by an auditorium talk by Mr. Chinbunny, Rush, Blue Tooth Johnson, Vernon Peggles and even Nicer Scott team up to form the Virginia Avenue Area Sons of Patriotism Salvage Indemnity: boys who collects scrap metals and paper for the U.S. Government during World War II.

Nicer and Rush have called a truce to their bickering for the duration of the war but Rush is keeping a little black book and putting down marks in it everytime Nicer does something that makes him mad. After the war (presumably) Rush will give Nicer "a paste upside the snoot" for every mark in the book.

I can't prove it but this sounds very much like war propaganda and one of the few times that Paul Rhymer wrote one of these types of shows. The family doesn't quite sound the same here - especially Sade (Bernadine Flynn) who acts way too nicey-nice - almost as though she is giving the regular listening audience a clue that she doesn't like the fact that the government is pressuring Rhymer to write a certain way. However, that's only speculation on my part.

The fact though remains that Flynn seems to be overacting and saying things totally out her character, such as, "It really is a good thing (about the scrap drive.)"

Sade normally poo-poos anything to do with the government and most things in general.

+ This is the first time in surviving episodes that the war has been mentioned or alluded to.

+ Rush mentioned that he had spent 20 minutes with Nicer this day and had already made nine marks in his little black book. He even gave Nicer a mark in the book for tying his shoe.

+ Rush speculates that a story of Nicer Scott's Uncle Ralph might be untrue: the man was so insane about a woman in Ohio that he said he'd disown his own grandfather for her - and he did, in a ceremony held in Hoffman City, Oklahoma. His grandfather died of grief 20 minutes later.

+ Nicer Scott also claims that his Uncle Harry was very patriotic. He owned the Central Indiana Mid-Western railroad but with a pick and a shovel he went out and removed all the rails and gave them to the U.S.government. He also gave the government all of his tools. In addition, he gave the government 10,000 miles worth of tracks, 46 locomotives and 19 switch engines.

The one drawback to all of this is that it left the city of Indianapolis cut off from civilization.

+ Vic mocks Rush and lists off a bunch of the names of his friends. One of those names was "Harry Phapp," which hasn't been mentioned before. He has mentioned a "L. Wiley Phapp" who works with Gus Fuss at Plant #17 in Dubuque, Iowa - I'm going to assume that they are the same person and going to characterize Wiley Phapp as being sometimes referred to as "Harry."