Sade, Dottie and Uncle Fletcher do their best to cheer up Leland Richards, who is doing his best not to show his emotions, as he is lonesome.

This episode ends quite oddly. I'm not at all thriled with this episode and if I ranked it, it would certainly go near the very bottom of the list! 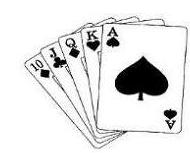 + Dottie says she can't play cards because she can't tell one card from another. Oh, ish!

+ For the third episode in a row, we have to endure Dottie going on and on about East St. Louis and something that Uncle Fletcher did there. He swears he doesn't know what she is talking about and for once, I think I actually believe him.

+ Leland says that when his Uncle George was 13 years old, he "cleaned up on" a teacher at school - in other words, he pummeled him good!

+ Uncle Fletcher tries to tell a story about Emmitt Swapsworth from Belvidere but since Dottie keeps interrupting him, he never tells it.

+ The funniest thing in the epsiode (maybe I should say, "the only funny thing in the episode") is when Uncle Fletcher asks Leland what game of cards he'd like to play: {{{HEAR}}}

A list of the card games: Yankle, Three Card Smirk, Split the Apple, Dog on the Roof, Stub the Butcher's Toe, Nutcracker, Bump, Sweet Alice, Jumbo Hustle, Down Bad Dealer, Let Go of My Shirt, Ponk, Big Snoot, Pink Snooker (which takes 17 decks of cards), Ten High Slump (a popular game at Crooked Indian National Park; you need to be outdoors and near a dead horse... but you can play inside with a fly swatter in place of the dead horse.)