B.B. Baugh has written a musical piece on the cornet for Vic entitled, "The Victor R. Gook Fontonelle." He was so taken with the fact that Baugh did such a thing that he invited him over for supper without asking Sade. 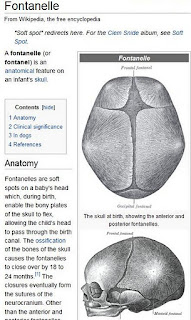 I could find nothing about a musical work called a 'Fontanelle.' But Wikipedia clearly shows that Russell was right. In other words, the song title literally means, Victor R. Gook has a soft spot on his head.

+ For supper, Sade had planned on having left-over meatloaf, canned vegetables and canned peaches.

Seems apparent by now that the Sewage Worker's band is made up completely of cornets. The fact that Baugh is 3rd chair in the band proves there are numerous cornet players in town. As a matter of fact, the cornet seems to be far the most popular musical instrument mentioned on Vic and Sade.

+ Russell says that B.B. Baugh is the inventor of Stingyberry Jam. (This is tackled at length in a later episode.)

+ Vic says that B.B. Baugh is an accomplished musician, artist and a talented composer.

+ B.B. Baugh lives at the Bright Kentucky Hotel. He had composed the song for Vic between the hours of 8 and midnight by candlelight in his hotel room with trains chugging by his window.

I believe this episode contains one of the funniest little sequences in the show's history, when Vic and Russell discuss when Sade might be home from shopping: {{{HEAR}}}