The Korkells travel 20 blocks by foot to borrow sugar but what is even more fascinating is the story of Mis' Korkell's mother, who is a professional football player! 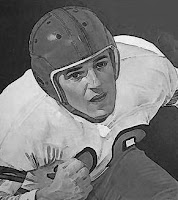 + Rush and Blue Tooth Johnson had a discussion about who was better looking. Rush has had a problem with conceit in the past.

+ The Gooks are in the front room and all 3 visitors enter at different times throughout the play through the back door -- and none of them knock.

+ Mis' Korkell's brother, Orville Wheenie (according to Wikipedia, played by Johnny Coons) is obviously a half-wit. Among the half-wit things he does is tell Rush that (he guesses) his sister "must be close to 30 years old" and he also tries to quiet down his accidental pompadour haircut with unusual items.

+ Vernon is a gas meter reader. His wife affectionately calls him, "Mr. Husband."

+ Despite going through World War II and a stint in the Navy, Rush is still only 14 years old.

+ Edith has enormous strength as she can easily pick up her husband, which amazes Rush. She claims she got her strength from her mother.

+ Mis' Korkell's mother plays professional football (probably for Peoria.) Their mascot seems to be the Wildcats. They were to play the Pittsburgh coal mining team (men) the next Saturday in Pittsburgh. {{{HEAR}}}