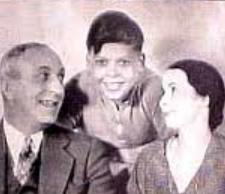 Not that it matters too much but I believe this is the first time I have heard of sleeping arrangements involving a married couple in radio (and I listen to a lot of old radio...)

The fact they have separate beds might be a Hays Code thing (or whatever it was called for radio at the time.) We know that 1950's and 1960's TV showed us separate beds for all of the couples there as well.

It's interesting to hear that Vic played baseball for an organized league and probably did so as an adult or near-adult.

Normal is a suburb of Bloomington - and as you probably know, Bloomington seems to be the setting for the Vic and Sade show.

Maybe it's just a part of human nature that I'm not very familiar with but children being homesick seems to a recurring theme in the show. (Recall that Leland Richards was homesick as well in another episode.)

Email ThisBlogThis!Share to TwitterShare to FacebookShare to Pinterest
LABELS Squirt