Rush has made a Christmas list.  He's whittled it down to the bone.  He's got very little cash to work with.

He's going to Plan B; all he has to do is get the dough from good ole' Gov -- well, make that, get past Sade in order to get it from Gov.  It's not an easy task.

SEE SOME DIALOGUE AND SYNOPSIS

This episode compares in some ways with this one, a rather odd episode where Rush went to Vic's office to ask for Christmas funds.

That particular episode took place in 1941.  Let's look at the difference in lists between the two episodes:
The price of Vic's gift remained the same.  Poor Vic, always getting the shaft.

* In the story about the imaginary 'Rollo K. Wintersquat' at the institution, Vic suggests he be sent some fudge.  That's not the only time someone locked away and fudge being sent to them are mentioned; Dottie Brainfeeble sent fudge to Martin Jordle, the man whose wife signed a paper and then the next thing he knew, he was in prison for 40 years.

* You wonder how good you can "get in" with a man by buying him a stinky, nickel cigar? 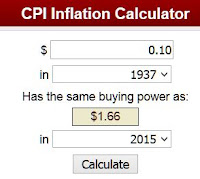 * "Bernardine" is once again mentioned in the script as an homage (you'd think) to  Bernardine Flynn. I'm almost certain that "Bernardine" was mentioned another time as well, but I'll be doggone if I can find the reference.

* Sade recalls Steve Kodunk in Dixon, whose father used to drown him with money.  He'd have a nickel or dime to spend every single recess and the kids would buzz around him like flies.

Hmmm.  You wonder how many kids would be swarming young Mr. Kodunk in 2015?  In the age of iPads and XBox, I'm guessing not a whole lot.

* It's likely that this story line (or something like it) took place nearly every Christmas on the show.  I believe Rhymer eventually took Sade out of the equation because she's generally a major league frump when it comes to spondulix, plus the shows with just Vic and Rush (that we know about) all turned out to be genuine peachy episodes.  Certainly Rhymer knew
this or you'd think someone told him.

* This episode took place on the road, as did apparently, several other episodes during the latter end of 1937.  This episode was live from Kenosha, Wisconsin.  We are most fortunate (thanks to Barbara Schwartz and the Friends of Vic and Sade) to have an article from the local paper there from December 4, 1937.  The interview probably took place the same day this episode was broadcast.  [Dunno about you, but I love neat stuff like that.]