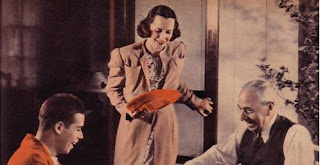 Very rarely do the Gook men hook up for a game of checkers, but we find them on the checkered battlefield.  Sade reminds Vic of a steep fifteen bucks the Reverend Kidneyslide owes him.  The good Reverend is moving away (the next day) and Sade thinks he should immediately collect the dun.  Will he?  Twists and Rhymer-esque hilarity ensues.

_________________________
Personally, I enjoyed this script very much.  You literally have no idea what's going to happen when it comes to Paul Rhymer.  Trying to anticipate the ending was very much like reaching the last chapter of a gripping mystery novel.

If you have already heard the audio series, this episode might remind you of:

* To my knowledge, this is only one of two known instances where the men play checkers.  The other instance was 34-02-01 Checkers.  The dialogue from the 1934 game reads very similar to the 1936 game.

* Rush says there are games of checkers down at the YMCA.  I always think of the YMCA being about athletics, but you often hear (on old TV and OTR) of people living there.  And now we know they played checkers there as well.

* As far as I can tell there is no East Bellwood, Ohio, Kidneyslide's destination.

* The newspaper article from which Sade reads states the Reverend is moving (prior to) August 15th; this surely means that this episode is a re-used script and the date was never changed.  This very well could have been one of the first evening broadcasts and it's likely that not every script used in the evening was a brand new one.  After all, Rhymer was a genius -- but he was not a machine.

* Jack Spoler was mentioned. He may be a preacher.  He is not to be found on the internet.