Sade has surprising news that the Donahues, their former next door neighbors, who had moved away just about a month prior, are moving back into their old house.

Rush realizes that he and Vic will be stuck moving back the two tons of coal that they were "gifted" with and Vic knows the boys will also be forced to help the Donahues move furniture.

_________________
Of course the men will scream like panthers!  Maybe Rush can come up with a better excuse than his "overalls are wrinkled" -- the flimsy excuse he used when he first had to move the large pile of coal. 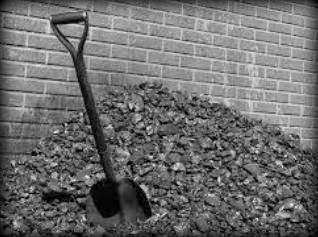 + Nicer Scott is up his old, narcissistic tricks - this time, claiming he's "The Most Popular Youngster on Virginia Avenue". Four months prior to this episode, Nicer extended his popularity farther than his street by claiming to have over 2 billion acquaintances.

+ Here's a bit of trivia you may have read before but forgotten:  Vic enjoys playing golf now and then.  It's mentioned in this script that he had a date with Mr. Buller to play at the end of the week.  Let's hope Vic wasn't asked to catch Buller's clubs from a fast passenger train...

+ It turns out that reason the Donahues moved back was they simply missed their neighbors.  (Never mind the fact that Mulberry Street is less than a mile away).