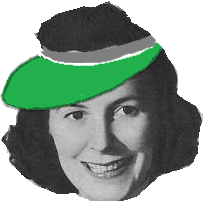 We know to expect this whenever Sade and 'Lady' (Ruthie Stembottom) get together downtown.  So what if the gals can't keep track of the tiny amounts of money that they are allowed?  So what if there's a few dollars missing?  It's not like they are buying anything important.

As a matter of fact, the ladies consume the same kinds of worthless junk every week.  It's money to blow and really, is of no consequence to the bread winners...

That's the way the story is supposed to go, anyway.  Vic, an accountant by trade, is fine with the mixed-up money.  I think he kind of gets a kick out of the way the ladies foul it all up; it's entertainment to him.  But Fred, Ruthie's blue collar husband, has a bad reaction this time around to the unaccounted-for spondulix.

Who's responsible?  No one knows (and no one will ever know) but Fred aims to find out!  He's even bought those stereotypical green visor caps for all four people (it's use is to lessen eyestrain) as he intends to have a pow-wow with the Gooks and go step-by-step through the muddled transactions! By golly, he wants some answers to that missing penny and the other misplaced monies.

But wait; one big 'ole ish and kybosh on that!

___________
This script is surprisingly good and it reads fresh. I use the word 'surprisingly' because the notes I had previously were terribly short.  It was as if this episode had been overlooked.  Rhymer provides strong voices to each character.  It feels as if he were completely in his prime here.  This script could very well be in the top 50 I have seen.

+ Sade bought white thread #50 (she always buys that color/#) and the girls bought gum drops, weighed themselves, had ice cream...

+ The fact that Vic could care less about a few dollars (remember, this was still ''The Great Depression'') might provide circumstantial proof that Vic was better off financially than perhaps we - or Sade - know.

+ The concept of the green visors is clever and totally Rhymeresque; there is always pleasure reading/hearing the way he took something that was already absurd and made it even more so.  Can you imagine Sade and Ruthie wearing green visors, trying to figure out where they lost seven cents?

+ While he was there and at-the-ready to contribute to the conversation with appropriate anecdotes, Rush gets totally ignored in this episode.  You'd figure an ordinary American citizen...

+ This episode ends with the ''stuff happens'' phrase.