A letter from Aunt Bess temporarily sidetracks Vic from a game of indoor horseshoes and then, has him accidentally laughing.  However, instead of blowing up, it only slightly aggravates Sade.

___________________
Sade usually would take out her frustration on Vic or Rush (or in this case, Russell) but instead, she seems to keep it inside.  Russell was the true instigator anyway.

* Walter read in the Freeport paper that the Consolidated Kitchenware plant in Dubuque, Iowa had a fire.  I'll bet Gus Fuss was in a rush.  And talk about your warm lemonade...

* Euncie is still learning the same piano piece ("The Great Colorado Train Robbery Scottish") and trying to do it without looking at the sheet music.

* Russell somehow gets under the davenport, looking for a penny.  The davenport  must be huge.  Bluetooth was also under this davenport in 1939. 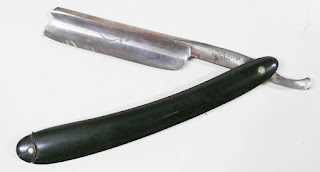 * Is it a joke when the Paul Rhymer script tells of a man who was college-educated who's purpose was sharpening razors?  Even though we have oceans of articles on Rhymer, I have yet to even be offered a hint why he was seemingly so fascinated with barbers and razors.

* The letter suggests that Sade come for a visit; Bess all but eliminates Vic and Russell from coming in her wording.  It seems that Sade probably didn't take up her sister on her offer - according to the episodes we know to exist shortly after this aired.