It's a rainy, gloomy day...  The story starts off very sadly as Sade is headed to a funeral for a baby who has passed away, the daughter of a friend, Mis' Evans.

Vic has a hurt knee and is confined to the davenport and therefore cannot attend the funeral.  Rush arrives home and Vic asks him to stay and help him.

As soon as Sade leaves for the funeral, all heck breaks loose as Rush first bothers his dad with all kinds of questions about the afterlife but then eventually tells his father what he has cooked up in terms of being kind to his needy neighbors.  Vic is beside himself in no way we have ever seen since!

SEE THE SCRIPT
(this is a PDF file, please give it a minute to load) 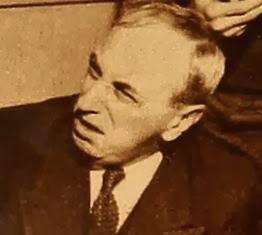 Probably the funniest thing I have read or heard in a Vic and Sade script.  Link, you might remember, is one of the few people in town we know is "colored" (the word used in the script.)

The main reason is this was 1933 and we have virtually nothing except script synopsis' from this era. This episode features a lot of talk about the Lincoln-Washington family (where "Link" gets his name) that has 14 children and they are expecting several relatives at their house; there's no place for anyone to sleep, so Rush has graciously put two young men (Theodore Roosevelt Lincoln-Washington and his large brother Woodrow Wilson Lincoln-Washington) in Vic and Sade's bed. 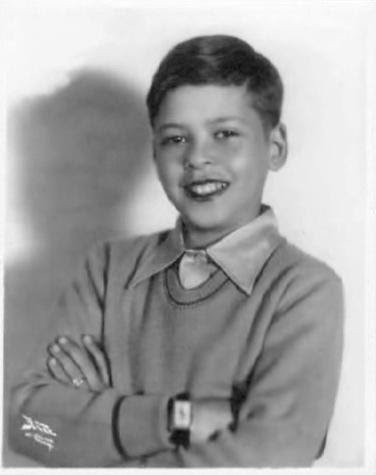 It's important to remember the era when reading this script. While today this script may look like racial injustice, 99.99% of the white people in America felt exactly the same way at the time.  In other words, try and look at this episode in a different way than you would look at it today.  That's the only fair way to evaluate such material, in my opinion.

It's also important to note two things about what Paul Rhymer wrote here: first of all, this script started with a very, very sad thought - the death of a baby.  It's shocking that it would begin that way.  But then you read the script and minutes later you are in tears laughing.  I have to feel this was just his unusual sense of humor at work.  The fact that he led his audience down the sad road only to change it up 180 degrees - it is an incredible joke he played on us!

Another thing: we are given indications even before Sade leaves the house that something funny is going to happen.  Rush compliments her on the way she looks and the family all laugh.

A grocery store, Goelzer's was mentioned; it's the only reference we have of this place.

MOST ASTONISHING VIC AND SADE EPISODE?
Of all the Vic and Sade episodes I have either heard or read, this one has to be the most astonishing! In the span of about eleven minutes, Paul Rhymer manages to explore issues of mortality, immortality, quality of life, apologetics, generosity, racial harmony, and domestic judgement, capping it with a situation as suspenseful as Frank Stockton’s The Lady and the Tiger.

Death has never intruded so brutally into the small house halfway up in the next block as it does here; as Sade prepares to attend the funeral for a sickly toddler. Rush soon corners Vic, who is recuperating on the sofa and unable to escape, with questions about eternity and faith that Vic cannot answer to either of their satisfaction. In spite of Vic’s fumbling, Rush understands the key to a life well-lived is sacrificial kindness, which he proposes to demonstrate, by inviting a friend (and some of his brothers) to share the Gook’s beds. This sacrifice is doubly striking, in that the friend is evidently of African ancestry. Even in the Land of Lincoln the Emancipator, many towns at that time were restricted communities. For instance, even Naperville had at least an informal "Out-of-Town-By-Sundown-Brown" code until after World War II. The Gooks’ town was, at least, more progressive than Naperville, and did not forbid non-white residents. (That family’s living on the other side of the tracks appears to have had more to do with their economic status than with their ethnicity.) The elder Gooks, however, prefer close-knit domestic arrangements, and object to strangers of any kind sleeping in their beds – Sade in particular. She may not be curious or educated, but she did manage her household smoothly.

Vic and Rush both know that Rush’s misguided kindness would not have gone so far awry if Sade had been home. When Sade does unexpectedly appear, what will she do? Will she scream like a panther and oust the strangers from her house? Or will the sentimental influence of that little coffin soften her ire? As in Stockton’s story, the outcome is left to the listener. What a brilliant, infuriating resolution! - SARAH COLE

The script is one the strangest you will find in the whole of old-time radio.  This is far beyond the famous "Adam and Eve" skit that somehow banned Mae West from radio for a good 10 years or more.  It is way beyond "The War of the Worlds" or any of that ilk.  I do not consider myself an expert of old-time radio as there are just far too many episodes to hear out there but of the 10,000 or shows I have heard, nothing comes close to this particular Vic and Sade episode.

Was it funny?  I'm not really sure if it was funny or not.  It does not read "funny."  As a matter of fact, it reads several different ways.

In the play's beginning, it must have been quite somber.  A two year child has died.  Not even in the soapiest of soap operas did  authors dare take a two year old baby and "kill" it, even or especially in 1932.  Yet, this is what happens in this episode.

Then we have Rush joking with his mother about how good she looks as she is about to go to the baby's funeral.  I'm not suggesting in way, shape or form there is anything wrong with this but a look at the script when this happens shows clearly that Rush is prodding his mother almost to a blushing point with compliments about her beauty as she is about to step out the door for the baby's funeral.  If nothing else, it's quite odd.

The oddities continue as Rush prods his father with questions about the afterlife.  Vic is uncomfortable with these questions

Then there is the whole racial matter.  I'm not sure how to approach it or even how I see it.  It all boils down to 1932 being a far different time than 2013.  Rush wants to help his less-fortunate neighbors, but even the most open-hearted person can see that he simply does it the wrong way in the script.  He doesn't ask ahead of time, he's got people sleeping in the bed behind the backs of his mother and father and most importantly, his mother is going to be shocked when she comes home to find them there (Sade is not the easiest person to trick or appease.  Sade will be a bear when she finds out and Vic KNOWS this.)

So while this script doesn't really seem to be funny, it probably was very, very funny - so funny in fact that writer Paul Rhymer chose to have the cast do it again less than a year after the first run on the air.

There's no doubt that this script wouldn't fly today and might even cause a controversy.  But it shows you just how far ahead of his time that Rhymer was and always has been.


HETHERINGTON – The episode is certainly unusual, and the opening does seem rather dark for a comedy. But death is part of life, and unfortunately in the Depression the death of a child was an all-too-frequent occurrence. Here Rhymer highlights some of the inappropriately humorous moments that arise even during dark times, particularly Rush’s misplaced efforts to be upbeat. The second half of the episode, dealing with Rush’s efforts to be kind to his friend Link and his brothers, reads somewhat uncomfortably for us today because of the terminology used—“colored,” “black giants” — and the stereotypes invoked about “lazy” black people. But for its time it is fairly progressive in that Rush more or less manipulates Vic into voicing acceptance of the African-Americans as fellow humans rather than as “colored” people. Paul Rhymer told interviewers that he got most of his details about daily life from his African-American maid Ethel, and perhaps this reflects Rhymer’s effort here to show Rush as more progressive and accepting than his parents.