Sade gets a package in the mail from her Uncle Fletcher.  He's heard she's into gardening and has sent her all kinds of seeds. 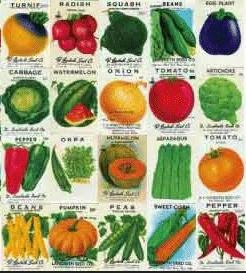 ________________
What I imagine when I read the above, is Uncle Fletcher doing a dandy, nice thing; sending exotic seeds to his niece and family - but probably putting all the seeds together, where one who didn't know, wouldn't know one seed from the next.

Why did Fletcher send seeds?  Obviously, after hearing about the Gooks having control over a vegetable garden (in an episode just 13 days prior) he sent the seeds.

+ Sade referred to the beef punkles as, "boiling beef".

+ A fictional detective was mentioned, "Firpo Vance."  In other episodes, "Philo Vance" and "Philco Vance" have been mentioned.

+ Found among the seeds: a sewing button, a thumbtack, a pill, bottle-cap, a tooth, a peach pit and an earring.

+ Uncle Fletcher's letter says the seeds include "Common varieties of radishes, onions, spinach, and so forth, many types of rare an' exotic vegetables: the South American semi-poison Hedge Banana, for instance.  Also, the Dismal Swamp Sugar Beet an' the Speckled Snake-Squash.  This latter may be identified by its shape – rather like a human being's thumb-nail."