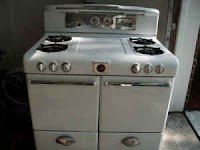 Mis' Donahue is away in Wisconsin, so Sade offers to cook for Mr. Donahue.  He ate there earlier in the week, so he tells Sade that he'll do the cooking, much to the chagrin of Sade.

While Donahue is cooking, Sade is furious.  Will her anger cease?


___________________________
It's a not a big deal but take note that the episode begins with Vic and Rush walking home; in doing so, they must have a two minute or so long conversation, certainly making this the longest conversation on a walk home in the history of the show (at least that we know about).

* There's a great deal mentioned in the script about what happened the prior day, which was a Tuesday. Since they are talking about it in the script, I think it is safe to say that these events took place in the previous episode.