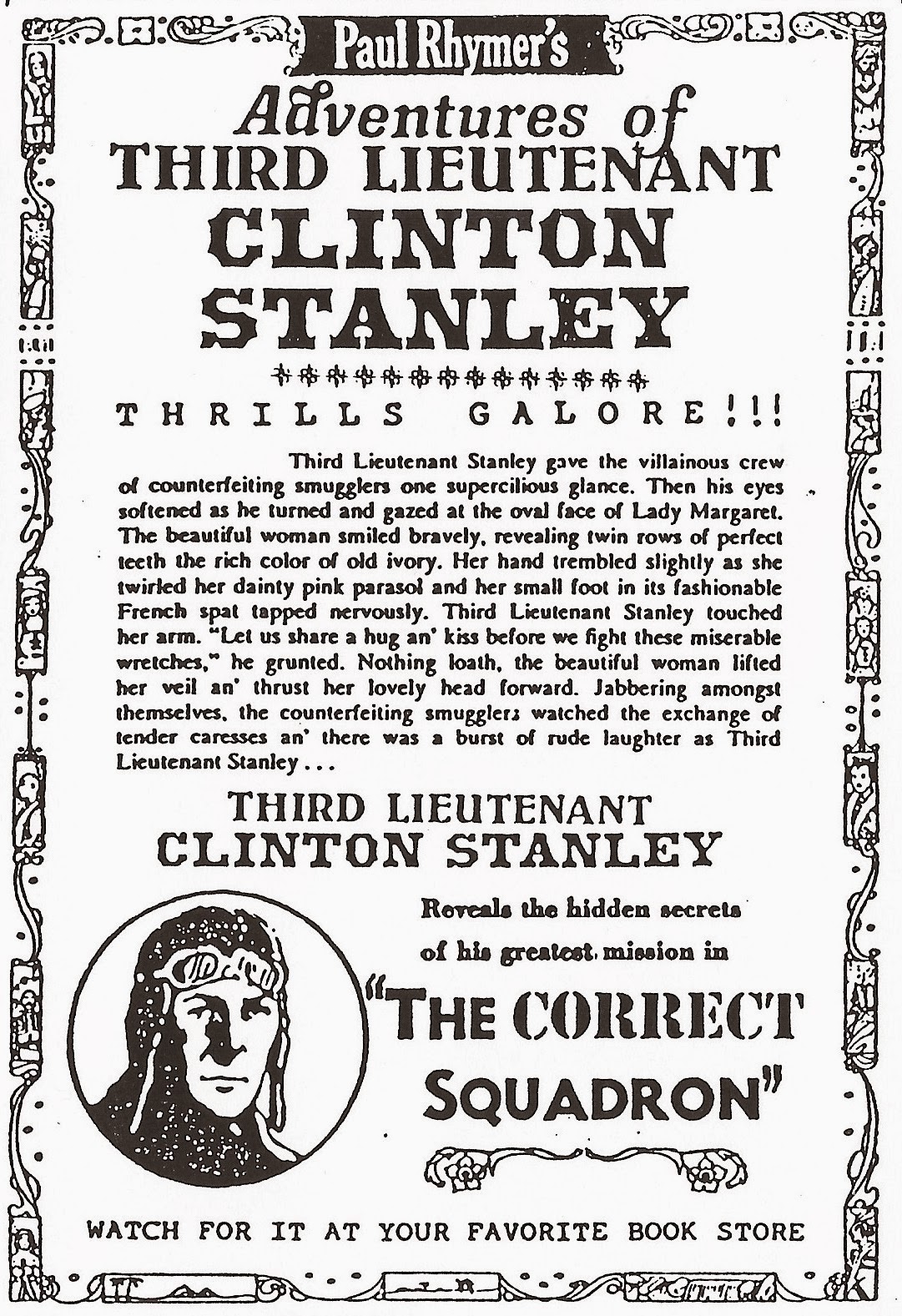 Children need heroes. Boys in particular need stalwart men of boldness, to inspire their own manly inclinations. Although the common challenges of family living require courage and imagination, young people seldom have the life experience to recognize or appreciate this fact. They want more obvious heroism.

To fill this need comes Third Lieutenant Stanley, the hero of Paul Rhymer's parody of the formula adventure stories for young adults. This unstoppable young Lieutenant, and his incapable sweetheart, face unlikely foes, all described in unbelievable prose! In these stories, all villains are counterfeiters, teeth can glitter hoarsely, and Lady Margaret is always ready with a kiss, a hug, or a titter, smirk, chuckle or rude guffaw. These cascades of cliffhangers are far from great literature, but they are unquestionably "vigorous fiction!"

The stories taught their readers patience, oratory (for they are frequently read out loud),and, above all, vigilance. As with Third Lieutenant Stanley, one never knows when the next group of clowns, snake charmers, piano tuners, headhunters, or clarinet virtuosos one meets might turn out to be counterfeiters! - by Sarah Cole
In an interview from 1970, Bill Idelson tells where the idea of Third Lieutenant Clinton Stanley came from: {{{HEAR}}}

Third Lieutenant Clinton Stanley on the Campus or Winning Laurels for Old Alma Mater - in this book, he plays football for both Harvard and Yale - at the same time - because he attends both universities!  He even scores a touchdown for both teams on the same run because:


You better watch out, said one big lubberly freshman.  But Third Lieutenant Stanley only smiled.  His hand darted out with the speed of lightning an' a moment later his victim lay writhing on the campus with a broken leg.

Another exciting part of the book involves the Lieutenant landing in his airplane right on a baseball diamond where Yale is playing out in the field.  He times it just right where he makes a catch of a high fly that wins the game for dear ol' Yale.

A bit in one book (not mentioned which one) had the Lieutenant's mother walking across a tightrope over Niagara Falls.

+ In episode 40-07-13 Short Bio of Little Dipper, Rush reads a bit from an unnamed Third Lieutenant Stanley book about a new character: Jack Woodward, who is described as, "A sturdy, well-built lad of 15 who loves the great out of doors." Also, "Has straight, even teeth, the color or rich cream. There was a streak of mischief in his makeup and he loved to play boyish pranks."

The book goes on to say he has four brothers, all who are feeble-minded.

"Jack is well-versed in Indian lore and knew all the secrets of the forest. Rabbits and squirrels were his playmates and even the birds in the trees responded..."
+ In episode 40-10-xx Shake Hands With R.J. Konk Rush reads about counterfeiting South American Pygmies (edited): {{{HEAR}}}

+ In episode 40-11-22 Third Lieutenant Stanley - Bright Kentucky Hotel, Rush reads from an unnamed Third Lieutenant Stanley novel: Third Lieutenant Stanley gave the villainous crew of counterfeiting smugglers one supercilious glance. Then his eyes softened as he turned and gazed at the oval face of Lady Margaret. The beautiful woman smiled bravely, revealing twin rows of perfect teeth the rich color of old ivory. Her hand trembled slightly as she twirled her dainty pink parasol and her small foot in its fashionable French spat tapped nervously. Third Lieutenant Stanley touched her arm. "Let us share a hug an' kiss before we fight these miserable wretches," he grunted. Nothing loath, the beautiful woman lifted her veil an' thrust her lovely head forward. Jabbering amongst themselves, the counterfeiting smugglers watched the exchange of tender caresses an' there was a burst of rude laughter as Third Lieutenant Stanley began to cry. "Sweetheart," he blubbered, "Five minutes from now I may be dead. But, sweetheart, I want you to know that my love for you transcends everything in...   The handsome young officer faced death valiantly. "You fellows can go jump in the creek, I'm not scared," he growled to the leader of the counterfeiting smugglers. But for Lady Margaret he had a sweet smile an' eyes that twinkled merrily. "Give me one more kiss an' one more hug before I kick the bucket, sweetheart," he gloated. The beautiful woman simpered and coquettishly pretended that the mother-of-pearl buttons on her fashionable French spats had come unbuttoned. Finally, blushing furiously, she lifted her veil an' thrust forward her lovely head. "Just one hug an' one kiss now," she warned an' Third Lieutenant Stanley howled loudly his satisfaction an' approval.

+ In episode 41-03-25 Muddled Shopping Money Rush rehashes what's read from Third Lieutenant Clinton Stanley Among the Counterfeiting Left-Handed Natives of the Orange Sea or How Luck and Honesty Won Fame and Fortune.

In the book, Third Lieutenant Stanley faced death by drowning but escaped through a secret tunnel. Later, he is bound and gagged and all he can do is flex his muscles. He gets Lady Margaret to put a bullet on his arm. He flexes his muscle and the bullet shoots across the river and kills a counterfeiting, left-handed native of the Orange Sea!

The book starts out with Third Lieutenant Stanley and Lady Margaret under the power of counterfeiting deep sea divers. 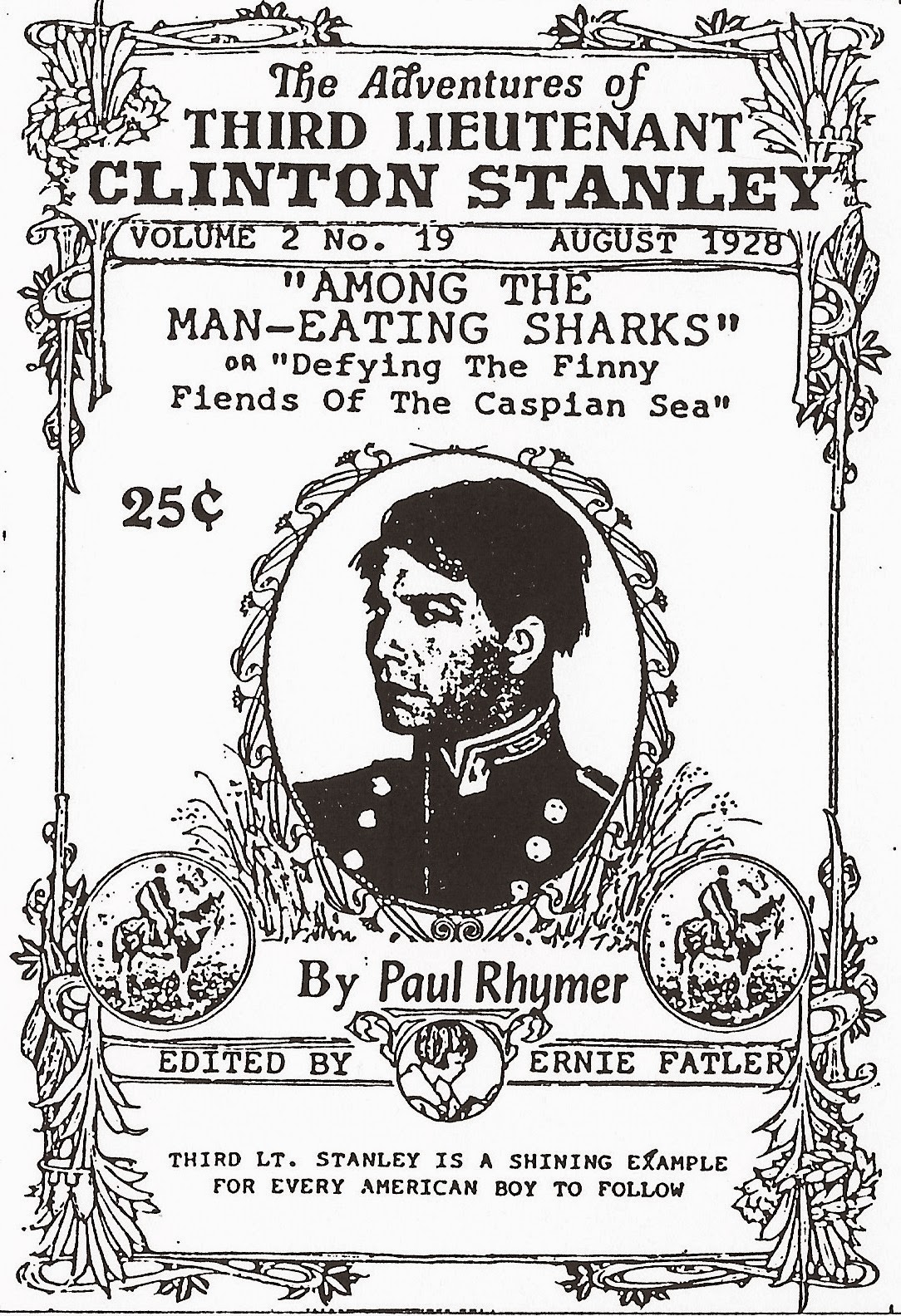 + In episode 46-08-22 Sade and Mis' Kessler Fight, Rush reads aloud from a volume of Third Lieutenant Stanley fiction and the villain is a counterfeiting clarinet virtuoso.

The book tells of the Lieutenant waving a crimson pennant. When asked by Vic why the Lieutenant would do this, Rush states that it's done by the Lieutenant to show he liked the kisses from Lady Margaret. If he doesn't enjoy the kisses, he "whips out a green pennant and waves it." He also has a brown pennant he waves if he enjoys a hug she gives him and a purple pennant if he doesn't enjoy the hug. He also has a grey pennant if he enjoyed the kiss but not the hug. There's also a burnt orange pennant to wave if he enjoyed the hug but not the kiss. If he enjoyed both the hug and the kiss, there's a maroon pennant to wave. There's also a striped pennant.
+ In episode 38-01-10 Hawaiian Islands Itinerary, Rush reads silently from a 3rd Lieutenant Stanley novel, but does not give the title.  The only detail revealed is that of a 15' rattlesnake.
From an unknown episode:

Third Lieutenant Stanley stopped a rushing locomotive with his bare hands, although it traveled 12 additional feet.  Third Lieutenant Stanley was unhurt, although bruised.  In the very next chapter of the unnamed book, he hopped over a 50 foot cliff, thanks to the fact that he stringed several live rattlesnakes together to form a rope. (source)
COMPOSITE LIST OF KNOWN VILLAINS: