The gang at work has elected Vic to buy a gift for Mr. Ruebush at Christmas. While he and Sade discuss possible gifts to buy, Rush is busy in the background, almost constanly using the telphone to collect debts that will allow him to buy Defense Savings Stamps. 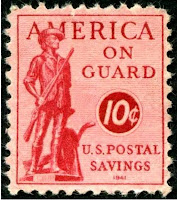 For one thing, Rush is there the whole episode but the action seems to be taking place around him.

For another thing, this seems to be some sort of propaganda episode for Defense Savings Stamps.

Even though this episode took place about three months prior to the attack on Pearl Harbor (and thus the Declaration of War against the Japanese), the United States began selling Defense Savings Stamps in May of 1941 to help support the production of military equipment, most of it for the British Allies and the Lend-Lease deal.

Some stamps could be had for as little as a dime.

The photograph on the left shows that less a week after this episode aired it was, "Defense Week."

It was common for radio shows to be used for government propaganda purposes - although as a rule, it seems that Paul Rhymer and his Vic and and Sade program were not usually a part of such campaigns.

+ Sade mentions that Vic had went on a trip with Mr. Ruebush. This seems to imply that perhaps the recent Art Van Harvey vacation could have been (and probably was) explained away using that excuse.

+ The Thimble Club (with Sade as one of the committee members) bought Defense Savings Stamps.

+ Cracky Otto is described as wearing a skull cap (a beanie, most probably) and tennis shoes.

+ Sade suggests (jokingly) that she and Vic should sit in the basement in the evenings in order to elude phone calls for Rush.

+ Here's a list of the gifts Sade suggests that Vic buy for Mr. Ruebush for Christmas:
+ Rush calls several friends in this episode and that provides us with a list of telephone numbers that we haven't known before this episode:
I love it when Vic gets frustrated when the telephone rings. His expression can't be beaten!: {{{HEAR}}}