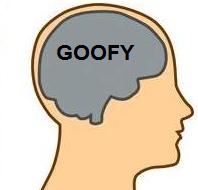 Vic relays to the family the fact that Stacey Yopp has had his motor skills reverse on him some 60 or 70 times in life and will often suddenly change from being right-handed to left-handed or vice versa.  On top of that, he loses the predominant motor skills in the hand he was using before.

Yopp wants to see a brain surgeon and it just so happens a noted Montana physician is is town. But Yopp's living quarters (the Bright Kentucky Hotel) is too loud and busy for him to properly have a doctor visit him there.

Yopp asks Vic if he can use his house to conduct the doctor appointment.

________________________
It seems plausible that writer Paul Rhymer took the premise of this episode from a tiny tidbit in 41-12-08 The Bottom Buffet Drawer, where Uncle Fletcher mentions Rupert J. L. Dunsquat from Dixon; was right-handed up to age 29 then turned left-handed overnight.

I don't know why exactly, but if there was a town character that had trouble staying one-handed or the other, it does seem *to me* that person would be Stacey Yopp. The name itself seems to imply the unique frailness of never knowing which-handed you are.

Rhymer's script is very unique but not that funny; however, it's one of those things that once you've hear it, you don't seem to forget it.

+ Fowler D. Sockers is the doctor that Yopp wants to consult. He's from Montana and is a brain surgeon, lecturer and polo player. He's in town to deliver a speech to the Better Businessman's Club at the Butler House Hotel.

+ Yopp is now a candidate for membership in the Sacred Stars of the Milky Way.