Vic has been invited to dine for lunch with some muckity-muck business associates at the Little Tiny Petite Pheasant Feather Tea Shoppy but unfortunately, the small restaurant only has 3 tables.  A scheduled party makes is necessary to scoot the table with Vic's associates against the side of the restaurant, making one spot unavailable to sit in.

________________________
Vic has a positive attitude from the start and is more than willing to partake of his dinner on a ladder. Even when a cold March rain begins to fall, Vic carries on with a courageous and uplifted attitude.

To me, this will always remain one of the more clever episodes written by Paul Rhymer.  It seems possible that when he was writing this episode that he thought of sticking Vic beneath the table (Rush suggests that may be where Vic is sitting.)  But sticking him outside by the window on a ladder in the rain is just plain funny - and clever.

+ The other business associates that will be dining "with" Vic are Mr. Buller, Gus Fuss and Mr. Ruebush.

+ Vic says Mr. Buller has been to the Little Tiny Petite Pheasant Feather Tea Shoppy in the past and has been impressed both with the portions and Mrs. Idler Grice's home-cooking skills.

+ In this episode, Vic refers to himself as a "cog in the wheel of big business." 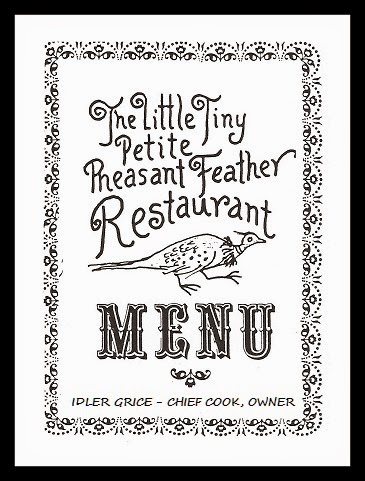 + In a story that is probably somehow connected to a missing episode, Rush tells Sade that Rain Brain Woofer, a chum in Rush's gym class and who shares a nearby locker, claims to be related to Sade's friend, Edith, from Raliegh, Kentucky.

+ We find out that Sade has a "rule" that the boys should always enter the house by the back kitchen door rather than the front door.

+ This episode provides ample proof of how much Clarence Hartzell's portrayal of Uncle Fletcher has help mold and influence all three Gook players. Listen carefully how they say, "Fine!"

+ I can't prove it but I will bet you almost anything that writer Paul Rhymer set up the Little Tiny Petite Pheasant Feather Tea Shoppy in the earlier episode (where Hank Gutstop gets the job as a hostess) just to set up the premise for this episode.

+ Though it can be seen many places all over the internet as the Tiny Petite Pheasant Feather Tea Shoppe, the fact of the matter is that in this episode and a previous episode where the restaurant was mentioned, Vic mentions that the title of the restaurant is the Little Tiny Petite Pheasant Feather Tea Shoppy.  "Shoppy" is spelled this way instead of the traditional "shoppe" in OTR logs.