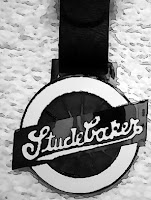 The Gooks are expecting Fred and Ruthie Stembottom over for a game of "500" when Uncle Flecther appears and sets out telling stories about his box full of watch fobs.

The episode has it's moments (as any episode does where Uncle Fletcher is telling stories) but after hearing 42-08-xx Washrag Collection, there's not many surprises.

+ Uncle Fletcher wants to go to the Bright Kentucky Hotel to visit Rishigan Fishigan. Since he'd have to cross the tracks to get to the hotel, Sade persuades him to go to the interurban station, which is in effect what we know as the train depot.

Uncle Fletcher seems to be a danger to himself in this episode (and perhaps, slightly out of his mind.) Sade is so concerned about him that she sends Russell to go with him out and about.

+ Ernie Fadler works as a ticket agent at the inter-urban station and is a friend of Uncle Fletcher. Fletcher decides he'll go and show him the watch fob collection.

+ Uncle Fletcher tells the story of Earl McFripp from Belvidere, who wore a razor strap as a watch fob. Wore yellow, bulldog-toed Oxfords; one shoe buttoned up while the other was laced up.

+ Uncle Fletcher has a gold watch fob that turned to putty! Originally the property of Dr. Aubrey Collins of Carlock, Illinois; the fob was 18 carart solid gold... but after he moved to Dismal Seepage, Ohio (where the climate is damp and peculiar...) in fifteen years, the climate changed the watch fob gold to putty.

+ The Stembottoms seem to make it inside the house but this is when the episode ends and we never hear their voices.