Sade is very excited for she has just gotten home from a huge sale at Yamilton's department store. She proceeds to tell Vic and Russell about every person she saw there and most every item that was ridiculously priced.

Many new characters make their debut in this episode:

+ Fern McFullerton. She was working as an extra clerk in the Yamilton's Underwear Department due to the high volume of traffic. She may have an unusual foot.

+ Mrs. Roy Tubbler. Sade and Ruthie saw her looking at nightgowns. She confused Vic with Fred and Fred with "Virgil."

+ Mrs. Cunningham and her husband Floyd. Sade saw her at Yamilton's.  Her husband works at the Five and Ten Cent store.

+ Geraldine. She used to live in Mis' Harris' rooming house. No mention is made of her parents and the impression is made that she may be an orphan. She goes to the Urban School, apparently the same school that Russell had once attended... her teacher there is Mis' Cutler, one of Russell's former teachers. She's obviously younger than he is. 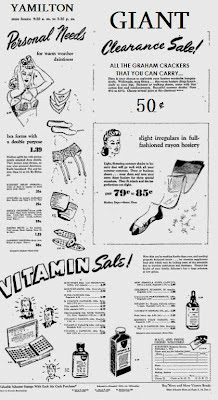 + Ernie Feedsmirk. He was over at the coal scuttles at Yamilton's. He purchased 3 of them!

+ Frida Gateman. She used to belong to the Thimble Club but hasn't attended a meeting in more than a year. She used to be 'snippy' but Sade thinks her husband might have put an end to that.

For more information about the above new people, including a few audio references, see Vic and Sade Characters.

+ Sade went on and on about how funny Ruthie can be. Yet we've been told in a previous episode that Ruthie doesn't "get" jokes.

+ Washrags were on sale at Yamilton's for as little as two for a nickel!

+ Another sale item that caught Sade's attention: 'all the graham crackers you could carry' for fifty cents!