Sade notices a monstrous, big chunk of the garbage box is missing. She, Vic and Russell play detective to find out what happened.

+ Blue Tooth Johnson told Russell that some fellow swallowed an alarm clock and it still kept time. They know this because they x-rayed his stomach. 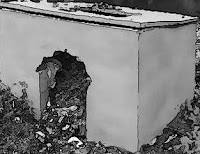 + Russell (who obviously reads the newspaper a great deal) read in the news that a fellow trained his adam's apple to keep the beat of music!

+ While doing their detective work, Vic sits down on the grass six different times.

+ We're not sure where, but the Husher family lives very near the Gooks.

+ A four year old girl named Dorthy is mentioned as staying with her grandparents on University Avenue. According to Sade, she pulled up a handful of flowers from Sade's garden at one time and Sade considers her a suspect in the garbage box mystery.