Mr. Gumpox is traveling to St. Louis for a couple of days and has asked Russell to take care of his horse Howard while he's away. 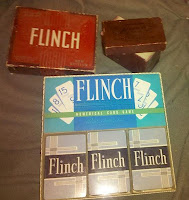 + Vic and Sade are playing Rummy; it takes more than a minute and a half for Sade to make her first play. She seems confused about the rules of the game, despite the fact she's played the game many times. She says she's afraid she has confused the rules with rules of other card games.

+ Howard has a sister named "Marie." Marie was not mentioned among Howard's other relatives in the earlier episode, 41-01-21 Demise of Bernice. This seems like a definite continuity issue. (However, it seems show writer Paul Rhymer threw continuity out the window of the show anyway after Bill Idelson went into the Navy.)

This error seems larger than the others though, since the earlier episode is probably one of the best-loved of all surviving episodes.

+ We find out more about Howard in this episode: he's a very gentle horse, is very intelligent and has a delicate constitution. Vic called him a "noble animal."

+ Russell has plans on riding Howard to the coal mine to visit his sister, Marie and also plans on riding to Mildred Tisdel's house as Mildred wants to show off to the neighbors.