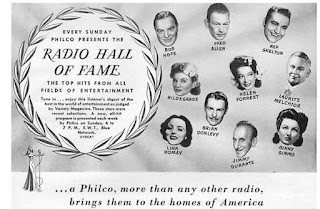 Because of the unusual broadcast, I kept the original introduction to the show by the Philco Radio Hall of Fame announcer Glen Riggs.  I also kept the audience clapping at the end, which adds to the flavor of the episode and helps remind us that this is a live broadcast.

On hiatus for the first time in 13 years, this episode features Sade, Vic, Russell and Uncle Fletcher in a somewhat crazy caricature of itself. After all, where else are you going to find "the horse that choked Billy Patterson" (never, in the history of the prior series, did a horse ever choke Billy Patterson!) and Vic admitting readily that he bought a hat, right to Sade's face (although no brim size is mentioned.) The episode also is crammed with exaggerations (especially from Sade) and lots of trivia that conflicts with prior episodes. This doesn't make the episode unfun but rather a curious anomaly and well worth hearing.
________________________

This particular recording is of much higher quality than any you have probably heard. I took this episode from a much-less-chopped-and-cropped Philco recording I found. You will find it sounds excellent!  Even if you don't usually download my episodes, you will want to download this one.

This episode is a fine way to bridge the gap from series one to series two.

+ Since this isn't Vic and Sade but rather, Philco's Radio Hall of Fame, none of this trivia will be used in Vic and Sade Characters.

+ David Whitehouse's voice seems to have lowered quite a bit in 6 months.

+ Uncle Fletcher contends a romance is brewing between his landlady, Mis' Keller and Rishigan Fishigan. This means that somewhere along the line, Mr. Harry Feedburn and Mis' Keller decided not to get married after all.

This kind of makes me mad as we listened to a month of episodes (the storyline on the radio was two and half months) about the brewing romance between Feedburn and Keller and it all went for nought.

+ Sade somehow knew that Vic had bought a new hat. It's never explained how she knew this.

+ Mis' Keller's name in this episode is "Helen." We've been told over and over that her name is "Leota."

+ Mr. Gumpox now has an automobile horn on his garbage wagon.

+ Rishigan Fishigan dressed up. He was wearing nearly the same outfit as Uncle Fletcher in this episode.

+ Vic got his initials put inside his hat. The hat salesman's name was Arthur Willis.

+ The town has two ladies named Mis' McFreemer. One lives on South Morris Ave. and the other on West Monroe Street.

+ The original version of this episode was first broadcast in 1941.  Rush played the part that Russell plays in this episode.