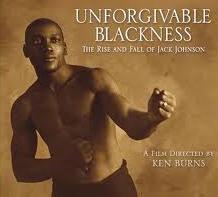 Jack Johnson was the focus of one of filmmaker Ken Burns' films: Unforgivable Blackness, which I have seen.  Johnson wasn't an angel but was a victim of racism by the boxing world.  Certainly an interesting study if you ever get a chance to view it; it's occasionally on PBS.

It's fun to see a mention of another lodge on the show that isn't involved with the Sacred Stars of the Milky Way.