Rush comes home with a shaved head... his parents are upset and feel bad for him until they find out the true purpose behind the deed.

Again, we see how tough times were in 1932 that the party favors were locks of hair! I wonder what kids would say today if they went to a party and were given hair? "Where's my iTunes gift card?"
literally

This episode reminds me, that for some reason after 1934, all of 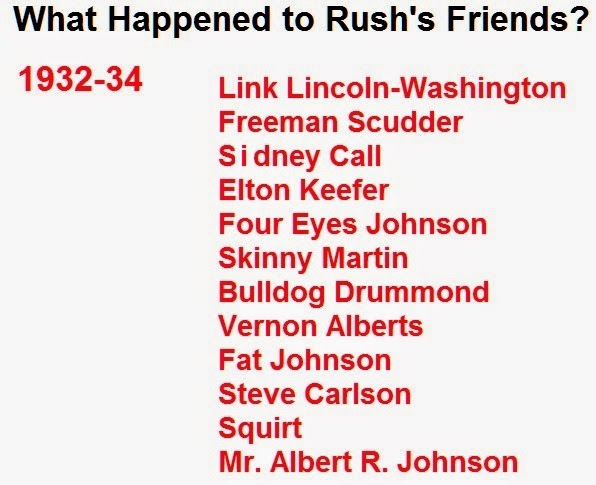 Rush's friends disappeared and were replaced with the gang we know today: Smelly, Cracky, Heinie, Rooster, Bluetooth, Vernon Peggles, Milton and the bunch. You could assume they all moved away or that Rush changed schools and lost his friends, but then you wonder whatever happened to...
What was so 'magical' about 1935 that suddenly made Paul Rhymer change Rush's friends, wholesale. And I do mean wholesale. You won't find his '32-'34 friends in his post-1934 world, or vice versa!

All of the friends on the list (above right) are important people in Rush's life (look 'em up on the character website if you don't believe me).

+ The phrase "given the mitten" is explained in detail, here.

+ When Vic sees Rush's baldish head, he tells him he "looks like a peeled onion" - the exact phrase Sade uses when she talks about Vic's choice of hats.