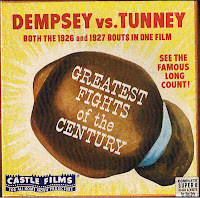 After eating too many strawberries, Rush finds himself sick and begs to climb in bed with his parents.

Rush, who was probably all legs and arms at the time -  refuses to fall asleep until his parents tell him a story.  They proceed to make up a whale of a tale about boxers Jack Dempsey and Gene Tunney counting sheep.

___________________
I absolutely love this very imaginative script. I think the reason I like it so much is that I can remember being sick or scared when I was very little (certainly much younger than Rush here - who is 9!) and climbing in bed with my parents.

They never told me a story though and I certainly would had never put my cold feet on them or I would have gotten a poke upside the snoot.  If I was in bed with them, I had to go to sleep.

Despite the fact that I love the script, we were told in another episode that Vic and Sade sleep in separate beds!