(Special contest script: promoting The advantages of having a MixMaster to make great food with Crisco.)

Sade now has her new MixMaster, and raves about it.  Meanwhile, Vic was complimented by his Chicago boss, Mr. Buller, and was told that he has a 'strong personality' and does his best to impress his family with the news, but no one really seems to care.

SEE SOME DIALOGUE AND THE SYNOPSIS
___________________
The Sunbeam MixMaster and Crisco promotion was still going on as of this script.  Not every script during this time involved the MixMaster but it's my guess that several do.  This script was done in a way that doesn't seem like a commercial.  As a matter of fact, it seems to fit in nicely.  Kudos to Paul Rhymer. 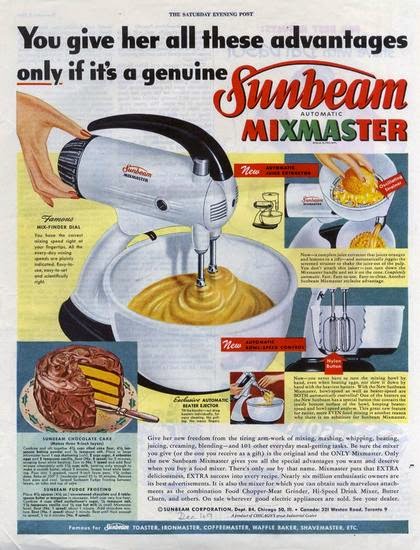 While Sade is raving about all she can make with the MixMaster, it occurs to me that she really wasn't mentioned in the shows as much of a cook. She did cook beef punkles and brick mush of course, and once she made 'Hooper Dip' and 'upside-down cake', but not much else.  She entices Vic and Rush in this episode with mentions of mashed potatoes and chocolate pudding.

+ The script suggests that the hype about the MixMaster might have been going on a month prior.