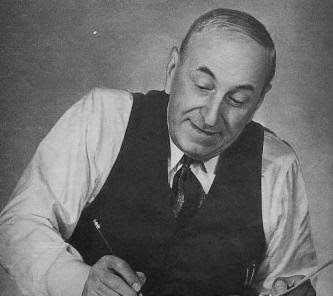 Sade gets to thinking about her sister Bess in Carberry, (yes, another letter), which leads her to prod Vic to write Walter.  Vic has nothing to say to Walter, so he writes him about stuff he had found in the newspaper.

Sade gets upset and goes to bed early, which is the kiss of death in the Gook household.

___________________
Though this script idea is very similar to this one, it is quite different.  Rush was in the previous version, and got Vic in trouble with Sade.  This episode sports Russell, who is more interested in talking about Oyster Krecker's cousin Lombard than anything else.  Both versions have pretty much the same ending.

Sade thinks Vic can write Walter just like he writes his pals in the lodge, but she fails to realize that he dislikes his brother-in-law, for all kinds of reasons that are never expressed on the program, only implied.  Vic would never come right out and tell Sade that Walter is a fat-head.  Doing so would only anger and hurt her.  Instead, he just ignores Walter - and ignores thinking about him too, it seems, or at least as little as possible.

When he is prodded to write him, he remembers (perhaps) that in the first version of this episode, Sade told him:

VIC: Such as what?

SADE: Oh... "Business is fine... I suppose you read in the newspaper about this, that, and the other thing. Looks like big doin's in Washington, D.C. with Congress making different laws..." You know...

Though she didn't tell him to copy from the newspaper (he did this in both letters), Vic has such a poor relationship with Walter that basically, this is all he can find to say to him.  It's like talking about the weather with a stranger, something I know that I am prone to do in that situation where I am almost forced into talking to someone I don't know.  Vic doesn't know Walter - and doesn't want to, either!

Sade mentions he should rattle off lodge trash to Walter, but Vic seems to think that lodge business should stay in the lodge.  Lodge secrets, no matter how small and insignificant, are still lodge secrets.  And he is the Exalted Big Dipper, after all.  Will Sade never learn?

+ Writer Paul Rhymer does a very interesting thing here; he has Russell use the word proffering, a 12th century word that pretty much means to offer.  He seemed to enjoy using archaic words in his scripts.

+ Cousin Lombard is a fellow I'd like to know a whole lot more about.

+ The letter to Walter:


"Dear Walter, How is every little thing with you?  We're all first-rate. Harry Murchison and family of 818 West Chestnut Street is moving to Fiendish, Indiana the first of next month.  His brother Clifford is the proprietor of a large shoe store in that city, and a partnership is to be set up.  Mr. & Mrs. Murchison and their two beautiful little girls, Elizabeth and Dorothy, have many friends in this community who will be sad to see them leave.  Mr. Murchison will be remembered as solo-trombonist with the Sewage Disposal Workers' Semi-Classical Silver Cornet Band.  The best wishes of hundreds of local people will accompany the Murchisons to their new home.  Well, Walter, I guess that's all for this time.  Yours truly, Vic."