There's big-doings at the Bright Kentucky Hotel as Rush, his pals and a
newspaper reporter have been invited by Mr. Gumpox to witness occupied beds traveling down hallways, passing each other!  This is just another of the bizarre things that happen in their crazy world. 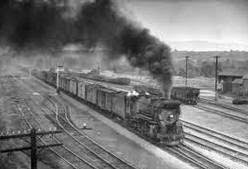 Yes, it's all true... and Vic and Sade are so enthralled with the story that they allow Rush to be out past 1 a.m.

Sade wants to tell the story to Mis' Donahue, who's bound to laugh out loud.

+ There's yet another barber (who works at the Butler House Hotel's barbershop) living at the Bright Kentucky: Cunningham.  His bed is prone to take off too, when the long, heavy trains barrel past the run-down eyesore.

+ Mr. Gumpox says that when they are in bed and he passes Cunningham in the hall, they wave at each other and say, ''Ta ta'' and ''Bon voyage'', respectively.

+ According to Sade, it appears that sometime prior to this episode, a train jumped the tracks and plowed into Gumpox's room.  That'd be a fine how-do-you-do, wouldn't it?

+ Though we have heard and read accounts of beds traveling down the halls of the Bright Kentucky, this is the first account we have in script form.